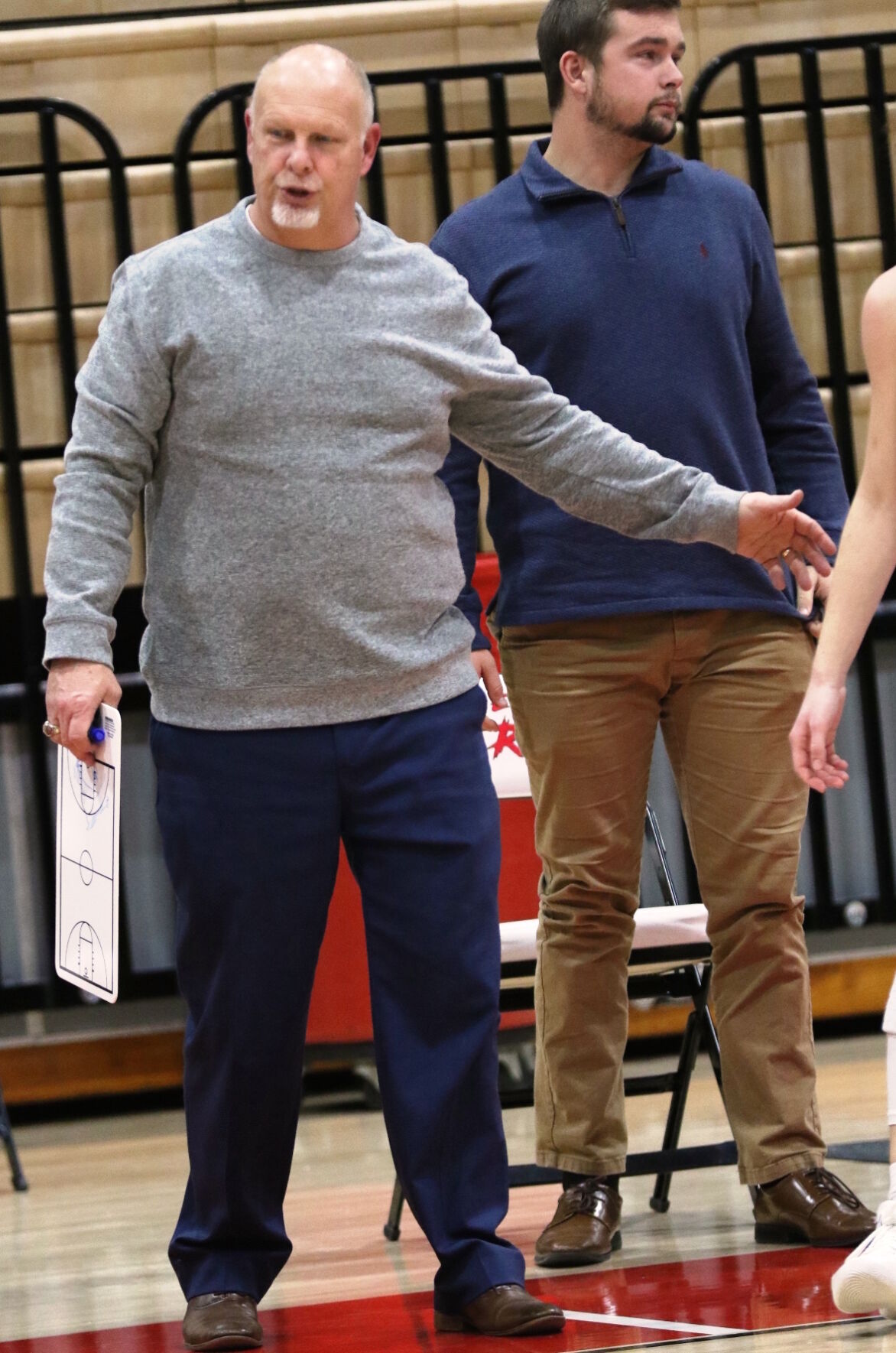 Fort Gibson girls basketball coach Chuck London directs practice, flanked by first-year assistant Jordan London, his son and the only one of his kids who didn't play for him in high school -- but has followed him into the coaching profession. 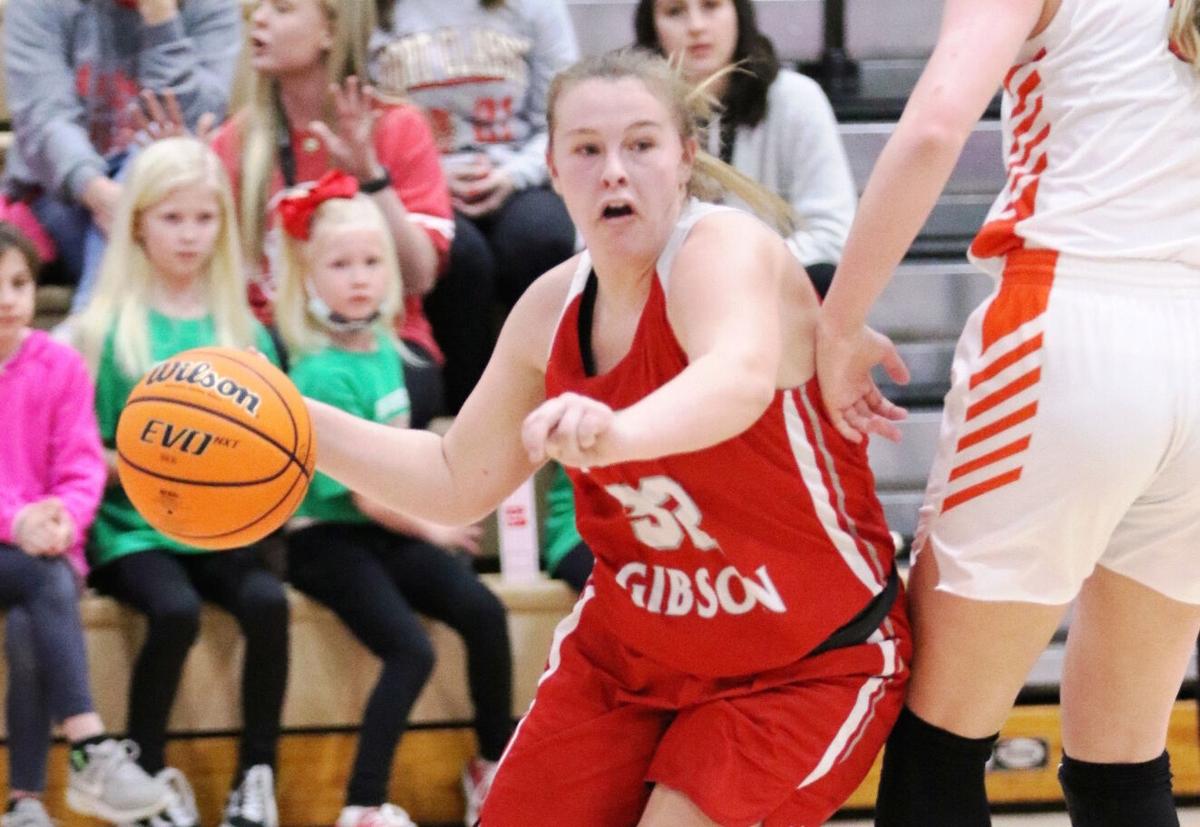 Kynzi London is the third of Chuck London's daughters to play for him at Fort Gibson. She is a senior. 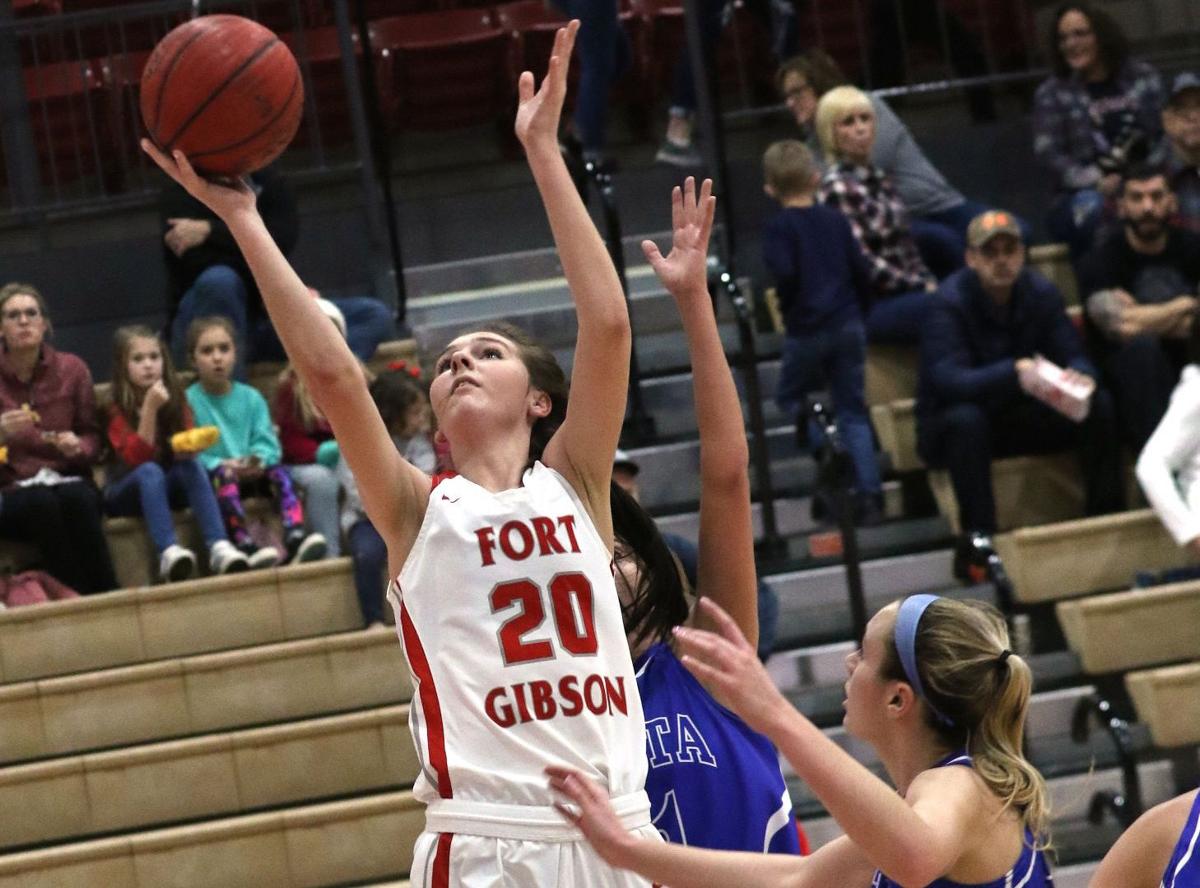 Baylee London was the second of Chuck London's daughters to play for him at Fort Gibson. She graduated last season and like her younger sister, missed the state tournament. 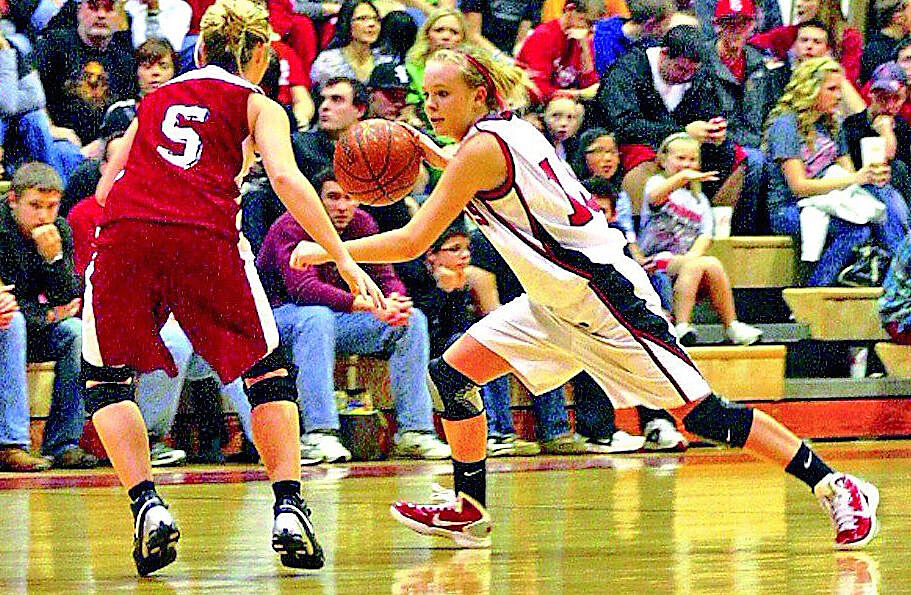 Taylor London Rumbley is the oldest of Chuck London's three daughters to play for him at Fort Gibson. She is a senior.

Fort Gibson girls basketball coach Chuck London directs practice, flanked by first-year assistant Jordan London, his son and the only one of his kids who didn't play for him in high school -- but has followed him into the coaching profession.

Kynzi London is the third of Chuck London's daughters to play for him at Fort Gibson. She is a senior.

Baylee London was the second of Chuck London's daughters to play for him at Fort Gibson. She graduated last season and like her younger sister, missed the state tournament.

Taylor London Rumbley is the oldest of Chuck London's three daughters to play for him at Fort Gibson. She is a senior.

It’s a couple of weeks from the end.

Chuck London knows it. Kynzi London, the last of his kids in the house, knows it.

But there really hasn’t been a reflective moment yet to stop and discuss the closing of a book of father-daughter coaching years within the Fort Gibson basketball program.

Not personally, anyway.  When it does, they’ll deal with it, then move forward, like so much that has happened along the final chapters of this story.

It’s become the MO for not only Kynzi and her dad, but these last two groups of Lady Tigers — who have dealt with an unfinished season due to the cancellation of the state tournament last year and a current campaign which has only led to periodic stoppages, all because of COVID-19.

“It’s been a life-learning lesson on how to be flexible and deal with outcomes,” said Chuck. “To some degree, we’ve become numb to it. You just deal with it and go on.”

The dad in him that’s watched both Taylor and Baylee graduate, one of those two get married along with his son, Jordan (more on him later), notes those special moments. Last year’s annual trip to state, 16 to date for Fort Gibson, never happened. Baylee’s graduation eventually happened, but late after prom and so many other senior moments disappeared due to a once-in-a-century event.

“As a coach, you want them to have the best of the best — the best season, the best senior year possible, and it breaks your heart for not only yours but all of them,” he said. “And when you bring it to the level of a dad, it’s even more frustrating because no one wants that for their own kids.

“I know I’ve said we’ve learned to deal with it. but it’s sad knowing what they missed out on.”

Taylor, who graduated in 2013 and is now Rumbley, experienced it differently than the rest. Her dad was an assistant under Jerry Walker during her playing years.

“I think we were special to our dad in our own way,”  she said. "I was the first to play for him and the first to get that experience while Baylee and Kynzi are the babies of the family, so it was experiencing the lasts of his kids.”

Chuck was still dad, but his team role differed.

“I did coach Taylor through junior high but in high school, the final decision didn’t lay with me although I had a lot of impact with Coach Walker,” Chuck said. “I would play whatever role was needed in the moment and I always thought when you talk good cop, bad cop, my role was to be the opposite of whatever my boss’s was. If he was letting into them, it was my job to the positive guy. If he was a good cop, I felt like I needed to not necessarily be the bad cop, but I would push harder, and even today I use that same balance with my assistants.

But as head coach, the role still changes.

“I feel like he was a little less hard on Taylor because he was an assistant. But from a coach’s daughters perspective, I think coaches are always harder on their own daughters because they expect a lot more out of us and less mistakes,” Baylee said. “I think he was tough as a coach, but he always reminded us he was a coach on the court and a dad at home and after every game, he always made it a point to come tell us ‘good job’ when we got home, whether we had our best game or not.”

To Chuck, his girls had the toughest role in the coach-daughter dynamic.

“In general you get the sense people watch you and think, are you going to deal with them the same way you do my kid or other kids,” he said. “That’s the tough part, and I’ve learned to do better with that, but here, those kind of issues are minimal,” he said. “But at times, I think I’ve been over-the-top tough with my own kids in dealing with that and they’ve received as much or more blame from me than they normally would have. But I have assistants like (Scott) Lowe who will call me on that.”

Kynzi says those issues are generated more from being the daughter in that situation than anything dad does.

“Being us, I don’t think you hear it, you just feel it and not necessary from any particular people here, but you just recognize that dynamic and you put yourself as a player in those situations where you’re the one who puts the pressure on yourself,” she said.

Kyli London has had her own balancing act as mom and coach’s wife.

“Each of them handles things differently,” she said of her girls. “Taylor is more like her dad personality wise, and nothing really bothers her. Baylee is more like me and takes things more personal. Kynzi is her own person. Being the youngest of four kids she brushes things off easily.

“However all three girls loved having their dad be their coach. He does a very good job of being coach on the court and dad at home.”

Of the kids, only one will follow in dad’s footsteps professionally speaking.  And none of them are daughters.

That role has been shouldered by Jordan, the second of the London kids. The former All-Phoenix MVP who went on to play collegiately at Central Oklahoma is in his first season as an assistant coach in both football and basketball and is playing that role as an assistant with his dad.

Chuck has some emotional moments thinking about what wasn’t.

“Because of my job that just never worked,” Chuck said of coaching Jordan. “ My son had a tremendous career, but as a dad sometimes you look back when it’s all over. I’d be lying if I said that it didn’t ever….

“Sometimes I feel guilty that I never got to coach Jordan. But there was never that opportunity, and you just deal with it and move along.”

“You learn not to take things for granted,” Kynzi said. “Like, every game matters, so you play it like it’s going to be your last.”

And soon, it will be that last game. Kynzi will go on to her next chapter. There’s been weddings, both in COVID times with both Jordan and Taylor. Other like moments will follow.

And just like that, the dinner table won’t be a place to talk team anymore.

“At some point as a coach you take your week or two off, you recharge, and then you start looking at the next season,”  Chuck said. “You never know what can happen or change but at this point, it’s full steam ahead. I’m thankful to be at Fort Gibson, I’m assistant principal, I’m the athletic director and they let me coach. Change is part of our life now more than ever, but no, no thought of leaving it yet.”

He’ll have Jordan to talk chalk. Or, as each girl suggested, maybe at some point they’ll be volunteer coaches for their own kids, just not professionally.

And not in the house of their youth, seven days a week.

Fort Gibson will host Bethany in the district round of the Class 4A playoffs on Tuesday before heading to Seminole for regionals.

Graveside services to be held at 11:00 A.M. on Saturday, April 17, 2021in the Haskell Cemetery. Dowdy-Marker Funeral Home.