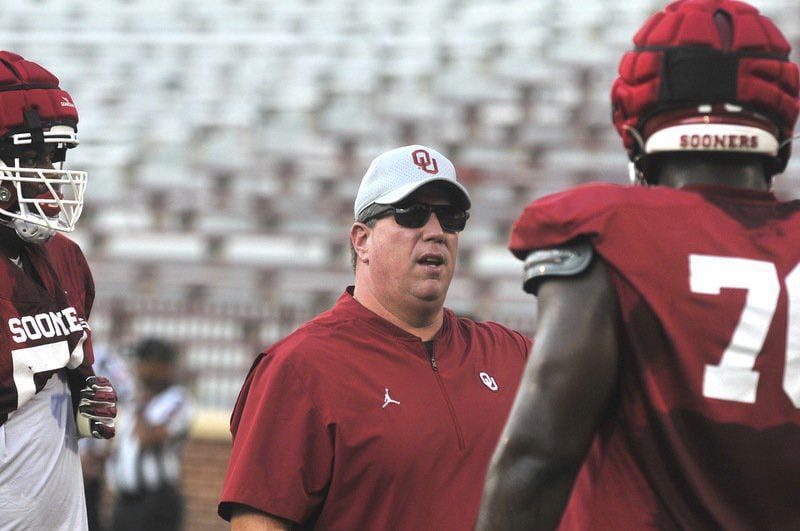 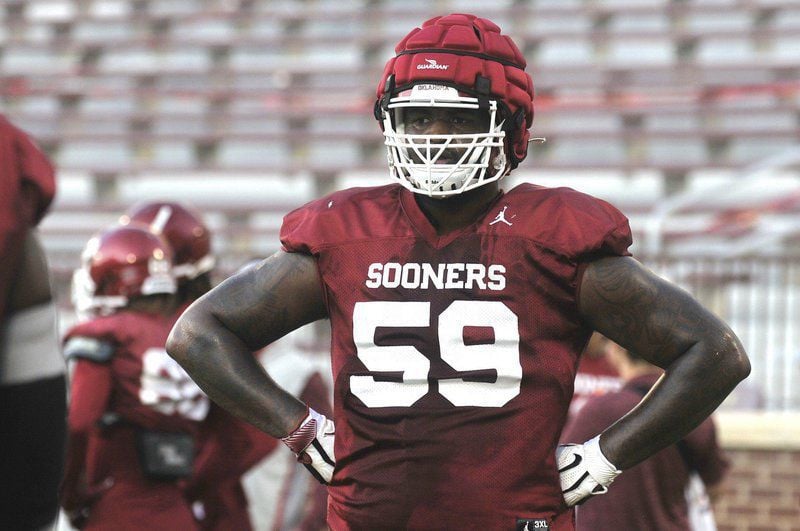 NORMAN — Bill Bedenbaugh opened the preseason with a tough task, having to replace four of Oklahoma’s five starters on the offensive line from a year ago. Lincoln Riley was asked if there had been any changes in his assistant coach.

It was like asking if the Great Wall of China had changed.

“Bill’s the same,” Riley said. “He actually wore a different pair of shoes today. He finally wore, like, a new pair of shoes. Honestly, I think he’s worn the same pair of practice shoes since I’ve been here.”

That would be four seasons without a different pair of shoes, at a place where squeaky clean apparel is available via a short walk to the equipment room. Bedenbaugh has no time for that walk.

He has parlayed a consistent nature and football aptitude into the co-offensive coordinator title and $750,000 annual salary he holds today with the Sooners, positioning himself as one of the nation’s premier offensive line coaches.

Not unlike Facebook founder Mark Zuckerburg or the late Apple CEO Steve Jobs, Bedenbaugh views wardrobe changes as an additional decision in a day that will already be filled with them.

“I’ll probably have these for the next four years,” Bedenbaugh said, glancing down at a new pair of Nikes. “I’ve got stuff at home my wife buys me that still has tags on it, you know? I wear the same thing every day. I really don’t care.”

One of OU’s biggest question marks ahead of Sunday’s season opener against Houston (6:30 p.m., ABC) is how it will regroup after winning last season's Joe Moore Award for the nation’s best offensive line. If the Sooners' offense thumps like an oiled piston the way it has in previous years, a chunk of credit rests with Bedenbaugh, whose mind has always been almost solely on football.

He's been that way since the age of 17, said former Iowa Wesleyan head coach Hal Mumme, who unearthed some of Bedenbaugh’s high school highlights from a recruiting service and brought him on without a scholarship, initially for extra depth on the offensive line. “Had he been about 3-4 inches taller he would’ve been a Big Ten player,” Mumme said.

Bedenbaugh offset his lack of size with intelligence. Mumme and Iowa Wesleyan’s offensive line coach at the time, Mike Leach, had been grooming another starting center for two years as they pioneered the revolutionary Air Raid offense. But that player abruptly quit because of homesickness before the 1991 season.

“I said, ‘You’re on scholarship,’” Mumme told Bedenbaugh, giving him the starting center position in what's now known as the first-ever Air Raid offense. The Tigers had run a shell of the scheme in previous seasons, but not at the uptempo speed common today.

Bedenbaugh was asked to think and play faster than any center in football had previously.

In the season opener against Northeast Missouri State, now Truman State, Iowa Wesleyan trailed 24-7 at halftime. Mumme assumed the rout was on. Then he walked into the locker room to find Bedenbaugh, a redshirt freshman, making line adjustments. Iowa Wesleyan won 34-31 and never huddled once.

The Tigers finished 10-2 and rewrote NAIA and school offensive records, running 965 plays, scoring 445 points and 55 touchdowns. Bedenbaugh’s responsibilities at center were unprecedented for the position, and in many ways this was how his coaching career began.

There were stops at Oklahoma Panhandle State and Valdosta State. Leach enjoyed seven years of him at Texas Tech until Bedenbaugh took the offensive line coaching job with Mike Stoops at Arizona in 2007. He became the Wildcats’ co-offensive coordinator in 2010 before Dana Holgorsen hired him at West Virginia, his last job before landing at OU in 2013.

Along the way, Bedenbaugh as unwavering. He’s always been all business.

“He’d actually be kind of impatient if you called on him to think of something else,” Leach said. “You’d ask him about something, and he’d kind of say, ‘Huh? What are you talking about?’ Like, ‘I’ve got important things to think about.’ O-line play and things. He’s a fun guy to coach with and a smart guy.”

Not to say he’s one-dimensional. Offensive line coaches work in a paradox, overseeing the biggest and often toughest players on the field — but choreographing them within the structure of an offense is as much like teaching ballet as it is football.

They have creative freedom to adjust stances, splits, techniques, and write the unique language players use on the field. Bedenbaugh has struck the right blend of creativity and consistency that has made offensive line rebuilds at OU less stressful.

Players take comfort in that. Bedenbaugh doesn’t change from the recruiting process to the sideline. In other words, “Bill is Bill,” OU center Creed Humphrey said with a chuckle. “He’s going to be the same way throughout, so it’s easy learning from him.”

“We have a certain time that we’ve gotta be somewhere, and he wanna be there five minutes early. You come on time, you’re late,” right tackle Adrian Ealy said. “In the last three years, he come in there with his gray, Nike Huarache shoes on, his cargo shorts on, he’ll change his shirt a couple days. But it’s all the same. Whatever you see from Coach B is what you get.”