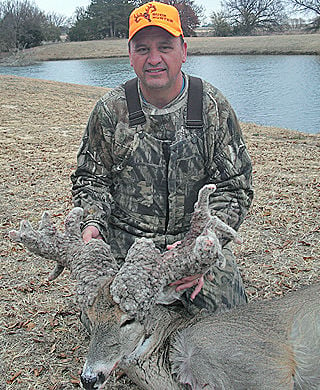 Russell Nickel with the cactus buck he harvested in western Oklahoma in 2011. 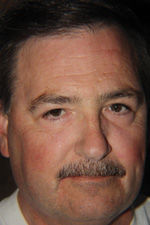 Russell Nickel with the cactus buck he harvested in western Oklahoma in 2011.

Deer season found me in western Oklahoma visiting a buddy of mine on his farm.

Russell Nickel invited me to Alfalfa County, which is located just south of the Kansas border near Aline. Although not successful, it was a great time of fellowship just getting away for a few days and seeing a different part of our state.

The land has a few hills in certain areas and there are blocks of timber and brush scattered around the area. It is red dirt country with numerous winter wheat fields. While there, Nickel and I hunted and he related a once-in-a lifetime happening that is still a topic of conversation in the area.

In November of 2011, along with his son-in-law, he spotted a massive cactus buck that had Nickel wondering what he was seeing. Nickel surmised that the buck must have some twine twisted around his antlers.

“I was looking at this buck and trying to figure out what was going on,” shared Nickel, “I knew there was something weird about him.”

“I thought there was stuff wrapped up in his rack. I could see that he was fairly wide and had some mass, it just didn’t make sense. I almost didn’t shoot him as I’d never seen anything like this before. I couldn’t take it anymore and decided to shoot this thing.”

After harvesting the deer, Nickel called the local game ranger saying, “You have to come look at this buck, I don’t even know how to check this deer in…he’s like an alien or something.”

The velvet overgrowth had a spongy feel to it.

A 2011 article written in Oklahoma Game & Fish magazine on the buck taken by Nickel relates the following information on this unique animal.

“A cactus buck is a deer that has a condition called cryptorchidism, which results in velvet remaining on antlers and continuing to grow throughout the year. The condition generally occurs to bucks that have irregular testicles or have incurred testicular damage, which impacts testosterone levels. Testosterone regulates antler growth and development,” wrote the staff of the magazine.

Among the riches of our state are the diverse ecosystems to be found. Take advantage of the hunting days left. It’s a long time until next deer season.

John Kilgore’s outdoor column runs Fridays in the Phoenix. To reach him with news or comments, call (918)348-9431 or email him at jkilgoreoutdoors@yahoo.com.