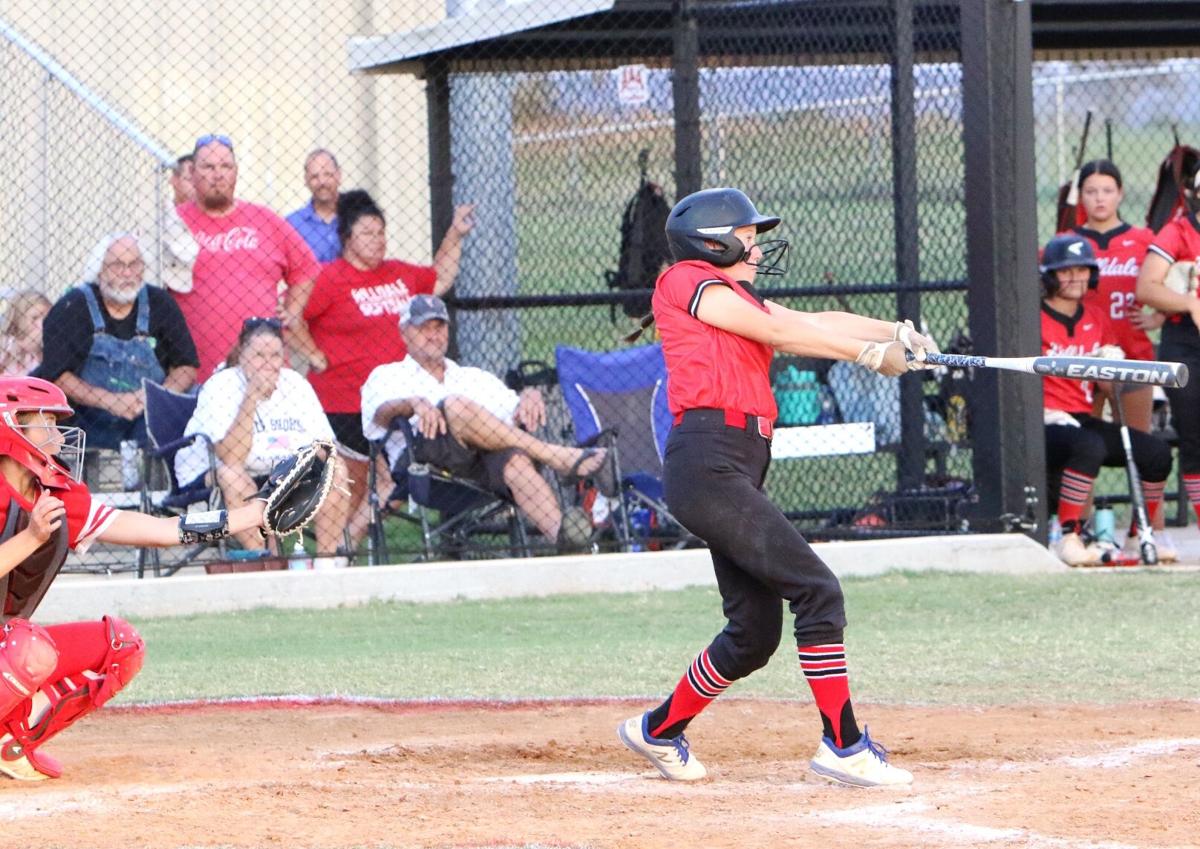 Hilldale’s Lane Sloan drives in the go-ahead  run in the 10th at Fort Gibson on Monday. Hilldale won 3-0. 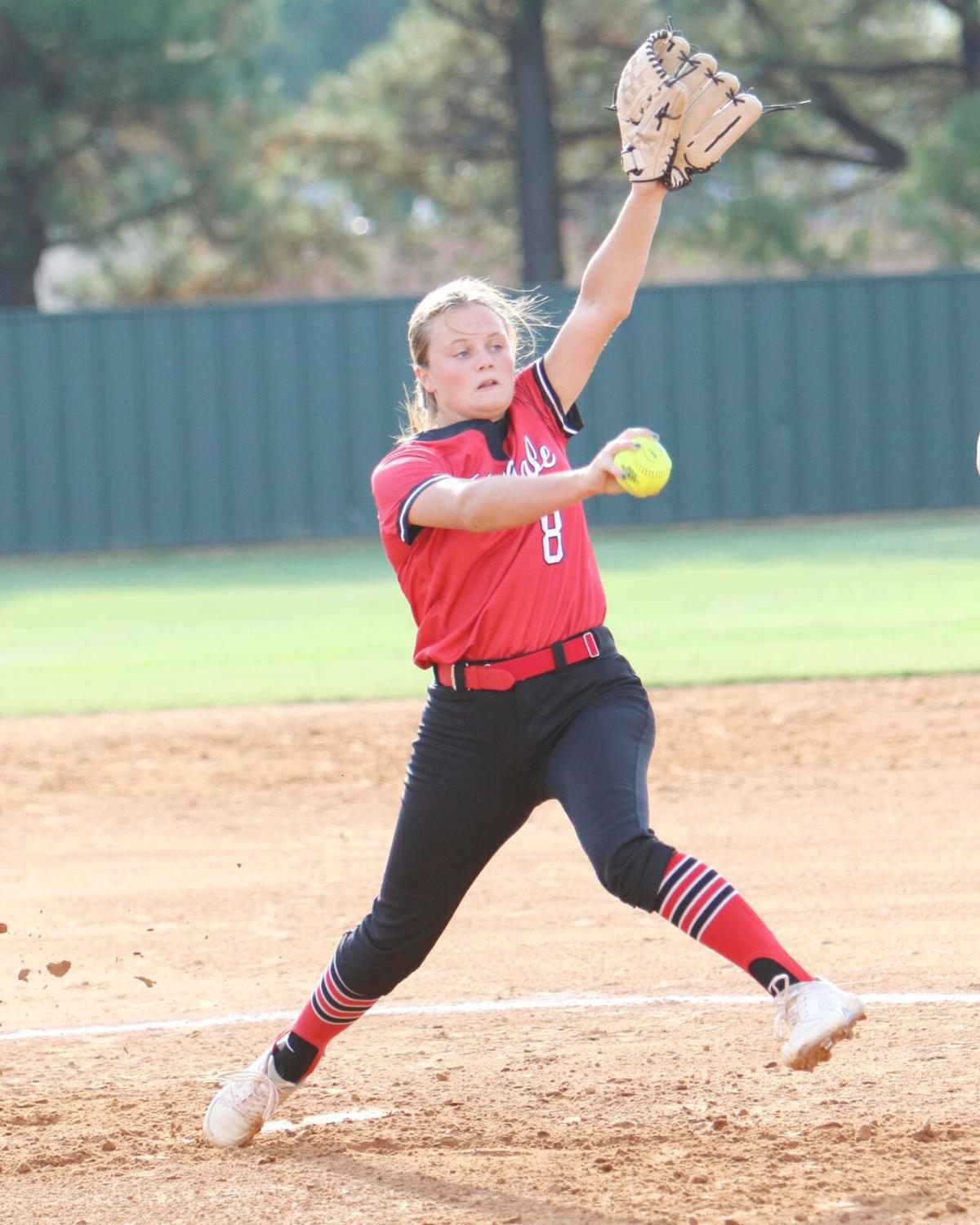 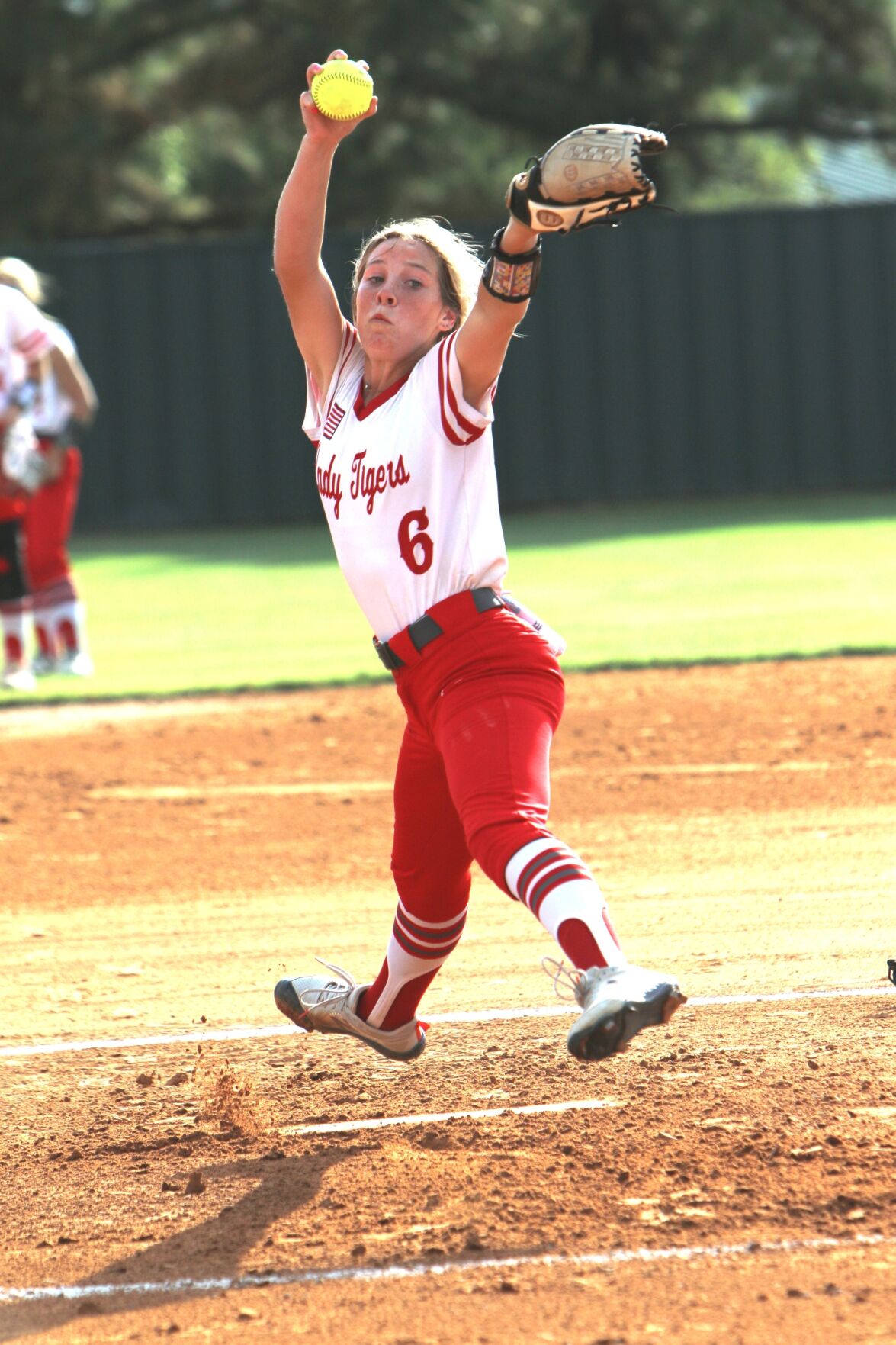 Hilldale’s Lane Sloan drives in the go-ahead  run in the 10th at Fort Gibson on Monday. Hilldale won 3-0.

Fort Gibson coach Joe Obregon will coach another day, his team will play another day and they’ll likely win some of those days.

But fate wasn’t on his side in 3-0 loss few if any expected to go 10 innings — not after Hilldale had beaten the Lady Tigers 10-0 in the first meeting 10-0, just over a month ago.

In the bottom of the ninth, Fort Gibson’s Graci Williams’ line drive to right got by Hilldale’s Emma Noe. Williams had three bases on it easily, but she came in at third with a wide turn. Obregon’s sign to hold appeared to come up late.

Williams came way off, and soon found herself out in a rundown.

Adding to the sting was Kaiah Austin was standing on deck.

Austin, who had doubled twice — including a shot to left to start the seventh where she would wind up stranded on third as the winning run in regulation — hit a shot to center that Bailey McClain dropped.

Catch or drop, it was deep enough to have won the game.

In the Hilldale 10th after Austin hit Emma Noe with a pitch, Lane Sloan punched a tweener between left-fielder Kyla Scott and Williams in center, bringing home Noe and ending the scoreless deadlock. Brooklyn Ellis and Kensley Allen each added RBI singles to left and right, respectively.

Kristjan Cantrell hit a one-out single to center in the Lady Tiger half of the 10th, but Hilldale shortstop Rley Barnoskie doubled her off after snagging a popout by Maya Young.

Hilldale emerged victorious. Obregon stepped up and shouldered the glaring moment of the game with dignity and humility.

“I gambled and I shouldn’t have,” he said. “It’s my fault, it’s my loss and they deserve better, this school and community deserve better than what I did today, and that loss is going to haunt me for a long time.”

There would be no haunt had Lady Hornets pitcher Brooklyn Ellis not made a ear-level stab of a rocket liner back at her off the bat of Kyla Scott with Austin on at third in the seventh. Austin had a pair of doubles and was left at third twice, once in the fourth.

Hilldale had its chances too, getting runners in scoring position with two outs in both the third and the fourth. In the top of the ninth with one out, Rylin Clark lined to right for a triple on a shot just over Fort Gibson first baseman Jordan Hayes’ glove.  Austin got Sydney Sapulpa and McClain on infield groundouts to end the threat, making a good play on the first one hit back at her as she checked Austin before throwing Sapulpa out.

Ellis knew she got a big assist in the ninth.

“Never give up on a ball and that’s exactly what we did. We never gave up,” she said.

Ellis allowed five hits and struck out seven and walked no one.  Four were split between Austin and Cantrell.

“Brooklyn didn’t feel well, but hung in and did a great job, especially with no walks,” Hilldale coach Darren Riddle said.

She gave up two hits in the first meeting of the rivals back in mid-August, striking out 10. Hilldale had 13 hits off Austin then. But Fort Gibson committed four errors, and three of Austin’s runs that day were unearned.

This time, Austin scattered 10 hits, struck out five and walked two. Barnoskie, Lexi Cramp and Allen had two hits each.

And Sloan had the breakthrough hit after going hitless in four at-bats.

“It was outside at the perfect spot,” the junior said. “I told myself just be patient. I was impatient every bat.”

Riddle said it was a vastly improved Tiger team.

“They played better defense. I don’t think we hit it as well, but (Austin) did a better job this time moving the ball around pretty good and she made us look bad in several at-bats,” he said.

Which made the what-ifs something that will in time, go away, but not now.

“Our girls have had moments of inconsistency but are starting to figure things out and step up,” Obregon said. “Today they stepped up. I feel terrible. I think they deserve better out of this one, but it’s my fault and my loss and I told them that.”

The Lady Tigers fell to 9-17 and 5-4. The Lady Hornets (15-5, 9-1)  remained one game behind first-place Verdigris, where they will travel to on Monday with the district title at stake.