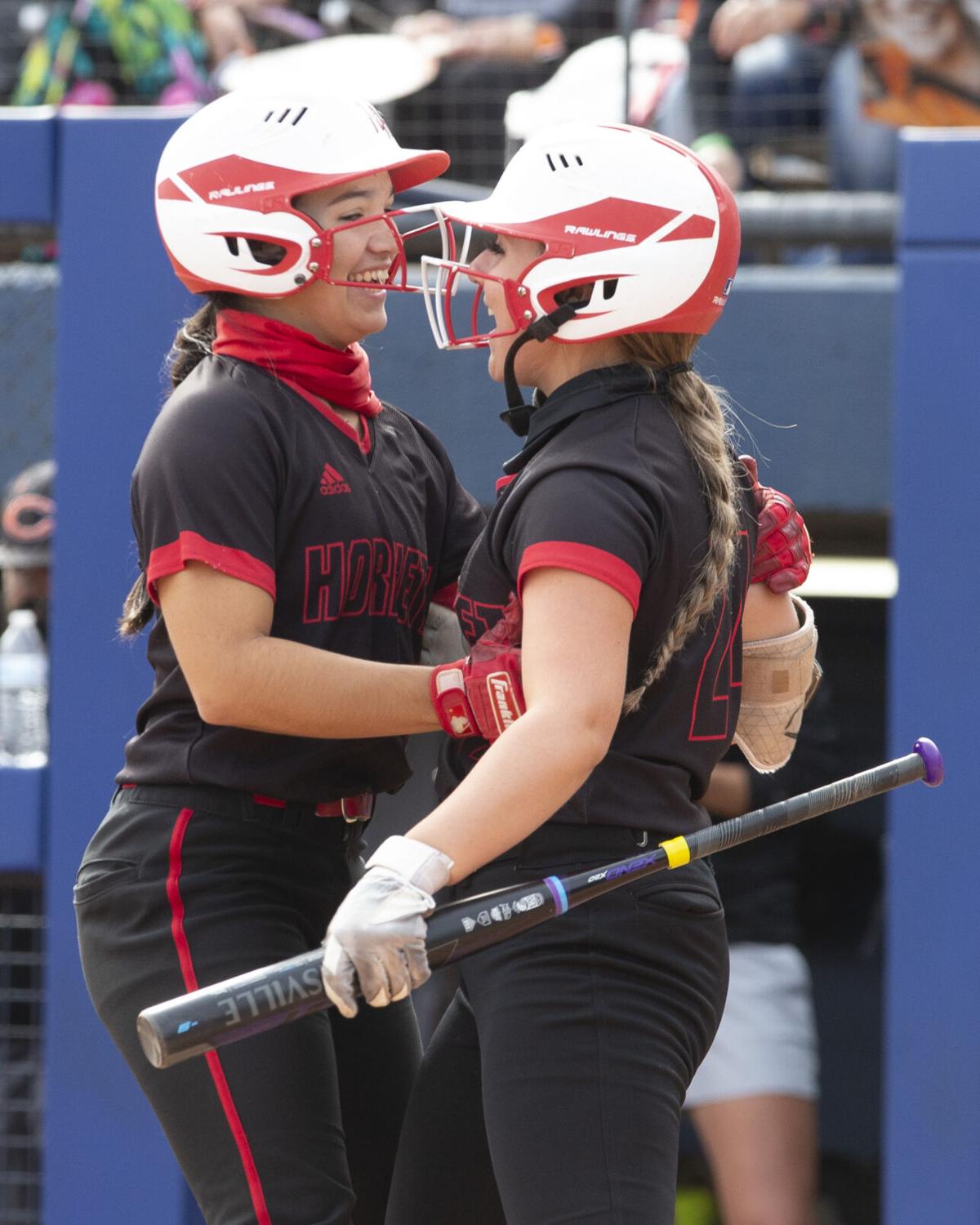 Riley Barnoskie, left, is met by Drew Riddle after rounding the bases on the first of her two home runs Thursday at USA Hall of Fame Stadium in the Class 4A quarterfinal contest with Cushing. Hilldale won 5-2. 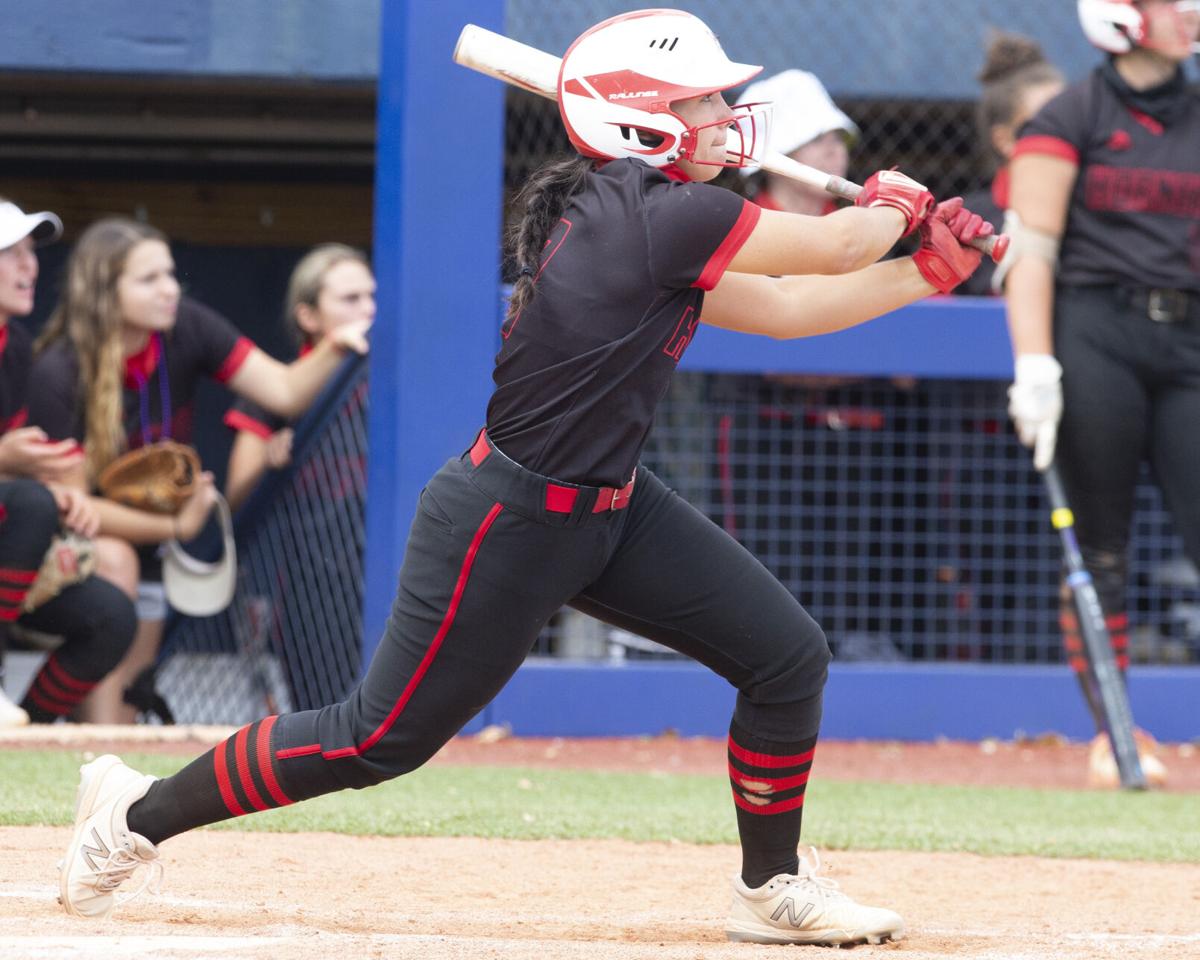 Hilldale's Riley Barnoskie connects on her second home run of the Class 4A quarterfinal game on Thursday, a two-run shot. Hilldale beat Cushing 5-2.

Riley Barnoskie, left, is met by Drew Riddle after rounding the bases on the first of her two home runs Thursday at USA Hall of Fame Stadium in the Class 4A quarterfinal contest with Cushing. Hilldale won 5-2.

Hilldale's Riley Barnoskie connects on her second home run of the Class 4A quarterfinal game on Thursday, a two-run shot. Hilldale beat Cushing 5-2.

OKLAHOMA CITY — No, there wasn’t a specific side of the bed she woke up on, or nothing different about her morning routine leading into Thursday’s first game of the Class 4A state fastpitch tournament.

But it was clearly Riley Barnoskie’s day.

The Hilldale junior had a day to remember, driving in all but one of her team’s runs on a pair of home runs and a triple, then coming up with some clutch defensive play as well at third base in a 5-2 quarterfinal win over the Cushing Tigers at USA Hall of Fame Stadium, the centerpiece of the famed softball facility here.

“Nothing at all. I was just ready to come out and win,” she said. “Just excited and ready to go.”

If Cushing pitcher Katelyn Carrier wasn’t shaken by an unusual wild pitch — one she lost grip on that sailed backwards on the fly near second base just moments before, scoring Celeste Wood to tie the contest— Barnoskie contributed some more shock by moments later parking a line drive over the fence in left.

In the third, she dropped one in the same vicinity, a two-run shot, for a 4-1 lead.

Pausing from the offensive heroics in the Cushing half of the fourth, her stab of a liner off the bat of Rachel Sherwood resulted in a bases-loaded, unassisted double play that would be the Tigers’ most serious threat of the contest.  Much earlier, Sherwood doubled and scored off Gabbi Everitt’s double two batters later in the top of the first for a brief Tigers’ advantage.

In the bottom of the fourth, with Wood on after reaching on a fielder’s choice, Cushing coach Nikki York opted to bring in Jayse Nicholas from left field to face Barnoskie. On a full-count pitch, Barnoskie laced a triple to right, bringing Wood home for what became the final run of the inning.

“I went at (Nicholas), with the same mentality as the first pitcher,” she said. “All along I was just trying to get a base hit and get on.”

Hilldale coach Darren Riddle just saw a focused hitter who going into the game hadn’t had a homer all year. She had two as a sophomore.

“Riley’s got great hands at the plate and in the field,” Riddle said. “She’s like any good hitter. A lot of the time pitchers don’t get her out, she gets herself out. But today she was locked in, zoned in and swung the bat at great pitches. I’m very proud of her.”

Wood, Drew Riddle, Keely Ibarra and Brooklyn Ellis all had a hit apiece for the Hornets. Riddle worked 5 1/3 innings in the circle and scattered seven hits while walking none and striking out none. Ellis relieved her with one out and one on in the sixth, got the first of her two strikeouts, then retired the side on a grounder to Barnoskie off the bat of Madi Alexander.

Ellis struck out the leadoff batter in the seventh in Sherwood as part of four consecutive outs before Everitt singled to right to complete a 4-for-4 game. Carrier then grounded to Wood at shortstop to end the game and the season of Cushing, 25-10 and champs of District 4A-1.

That three-hole (Everitt) and leadoff batter (Sherwood) were as good a one- and three-hole hitters as we’ve seen,” the Hilldale coach said.

But it’s the Hornets, the champs from 4A-6 making their ninth consecutive state trip, who move to the semifinals and a step closer to a second state title.

To take another step, they’ll have a monkey to pull off their backs. The past two seasons, an Oklahoma or Oklahoma State bound pitcher eliminated them. This time, they’ll face Lone Grove’s Emmy Guthrie, committed to the Sooners since 2017. Guthrie shut out Bristow on five hits.

Back on Sept. 18, Guthrie allowed two hits over five innings, striking out eight, in a 5-1 win over Hilldale in the Durant Tournament.