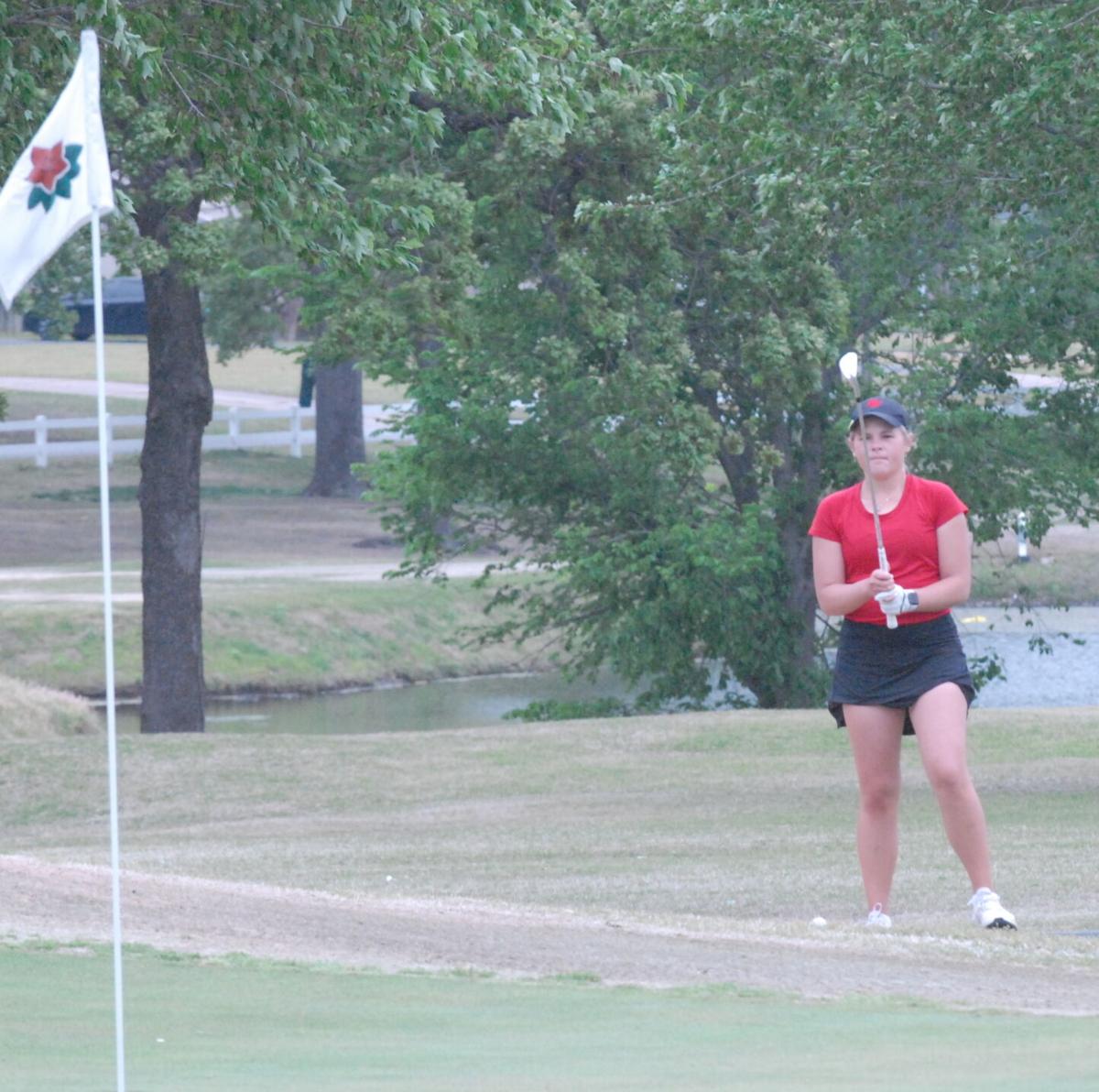 Fort Gibson freshman Layne Ailshie eyeballs the pin before dropping a 20-foot-chip shot for birdie on the 18th green during the Class 4A girls regional tournament Tuesday at Muskogee Golf Club. Ailshie shot 74 to win the medalist honors. 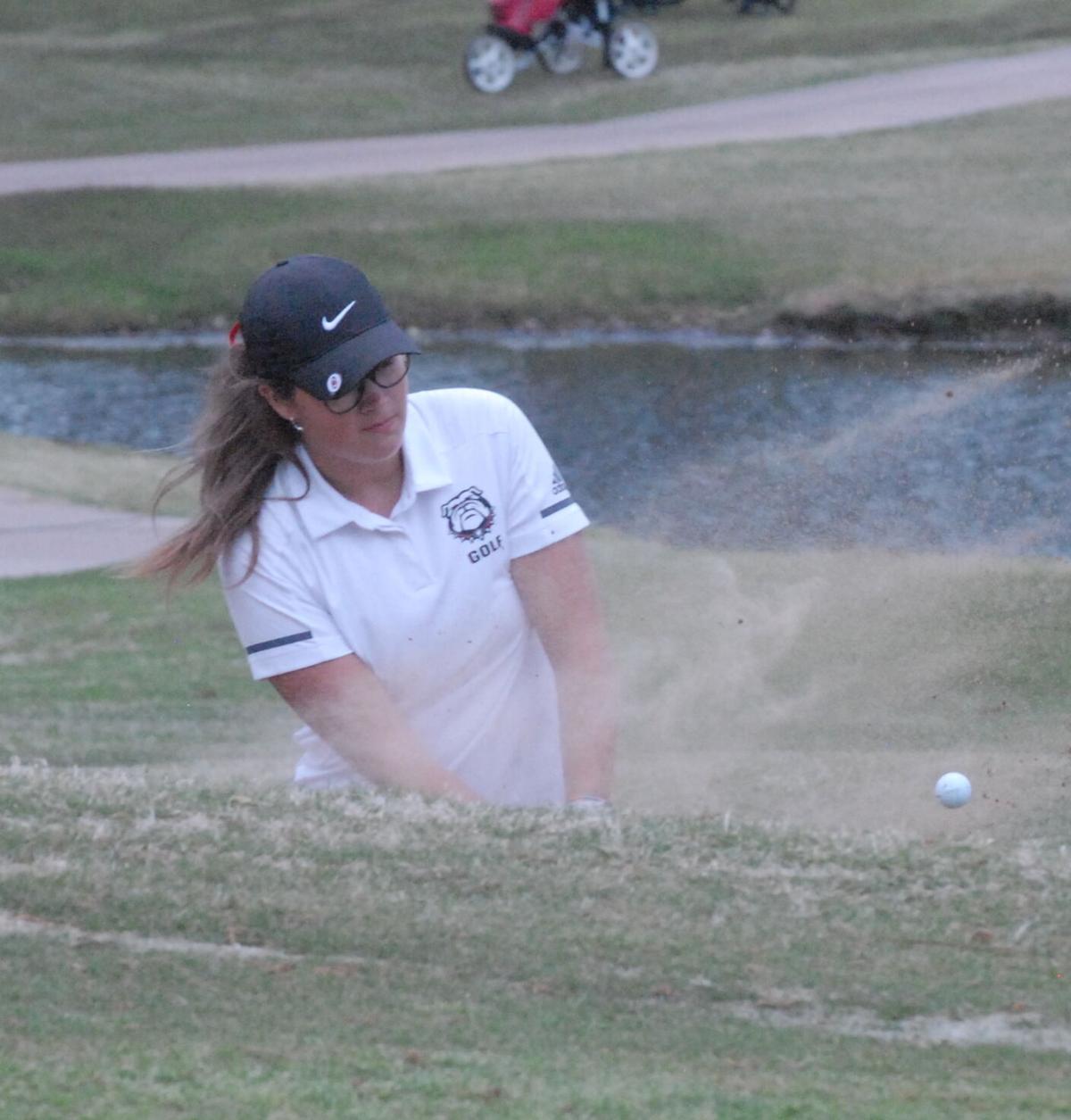 Wagoner’s Rylie Spaulding chips out of the bunker during her round Tuesday at the Class 4A regional tournament at Muskogee Golf Club. Spaulding finished second individually and Wagoner edged Hilldale  by a single shot to win its first-ever regional championship.

Fort Gibson freshman Layne Ailshie eyeballs the pin before dropping a 20-foot-chip shot for birdie on the 18th green during the Class 4A girls regional tournament Tuesday at Muskogee Golf Club. Ailshie shot 74 to win the medalist honors.

Wagoner’s Rylie Spaulding chips out of the bunker during her round Tuesday at the Class 4A regional tournament at Muskogee Golf Club. Spaulding finished second individually and Wagoner edged Hilldale  by a single shot to win its first-ever regional championship.

Hilldale’s girls have had a deep bunker full of golf achievements among teams in this region over the last 15 years, with five state team titles among them.

On Tuesday in the Class 4A regional at Muskogee Golf Club, Wagoner made its own divot, knocking off the 2019 state champions by a mere stroke for its first-ever regional title, a couple weeks after winning its first conference title with the Lady Hornets second, 361 to 362.

“First in the history of the school and I’m pretty proud of it,” said Wagoner coach James “Moose Henson. “Hilldale is a good program, Coach (Oren) Sikes has done a really good job with them, but for us, this is quite an accomplishment.”

Two years ago, Wagoner was second in its regional then lost to Hilldale by 107 strokes at state, finishing second. Sikes’ squad was primed to win again last year before COVID-19 hit and with that, four seniors graduated without a chance to defend.

Wagoner lost a couple of seniors, but had its top bag back in Rylie Spaulding. The Lady Bulldogs have won each time they’ve played Hilldale this year, including a tiebreaker at Poteau.

“We’re getting there,” said Sikes of his rebuilding year. “We’ll be competitive (at state).”

Spaulding shot an 81 which was seven shots behind regional medalist and freshman Layne Ailshie of Fort Gibson. More on Ailshie momentarily.

Spaulding had nine pars and had an eight-shot advantage over Hilldale’s 1, Addy Asmus, who shot an 89 and was in her group, as was Ailshie.

“My long putting really came through for me,” Spaulding said. “My 70-80 yard shots I was either short or blading it. When my driver is on I can tear up this course. The par 5s and par 4s are very makeable.”

Those pars helped make the difference.

“Last year we were definitely cut short by not getting to play,” she said. “We’re all friends with the Hilldale girls. Either of us deserves to win this. If we can keep it together mentally next week I think we have a shot.”

State is in Cushing Wednesday and Thursday. That’s where Ailshie will try to start her own trend in her first year in high school.

Her shotgun start coming on 10, she was 3-over when she made her first birdie on 15, missing an eagle by two feet, then chipped in off the green from about 20 feet for a birdie on 18 and another at 7.

“This is a course I’m comfortable with being my home course, but it’s  a tough course because the fairways are tight with all the trees,” Ailshie said.

Now its state and Buffalo Rock in Cushing, where she’s played twice — a practice round and then the 78 she shot to finish second behind Kingfisher’s Maddi Kamas, the 2019 state runner-up, in a tournament earlier this year.

“We play a lot together in junior tournaments,” Ailshie said. “I’m comfortable playing courses I’m familiar with and I’m more familiar now with this one. She’s really good, but I’ve just got to go play my round instead of playing against her.”

Mechelle Vermillion of Wagoner was third with an 85. Hilldale’s Aubree Morton was fourth with an 86.

Fort Gibson wound up third overall at 405 and will go to state in coach Jordan London’s first year at the helm.

Also for Hilldale, Adde Glass shot a 90, Victoria Wiedel a 97 and Karlie Kirkhart a 101. Emerson Glass, a six-bag not eligible to count on team totals, shot a 90.

Wagoner’s scores included Caitlyn Henson, the Lady Bulldogs’ only senior, at 91, Brekka Watkins at 104 and Katlyn Louviere a 108.