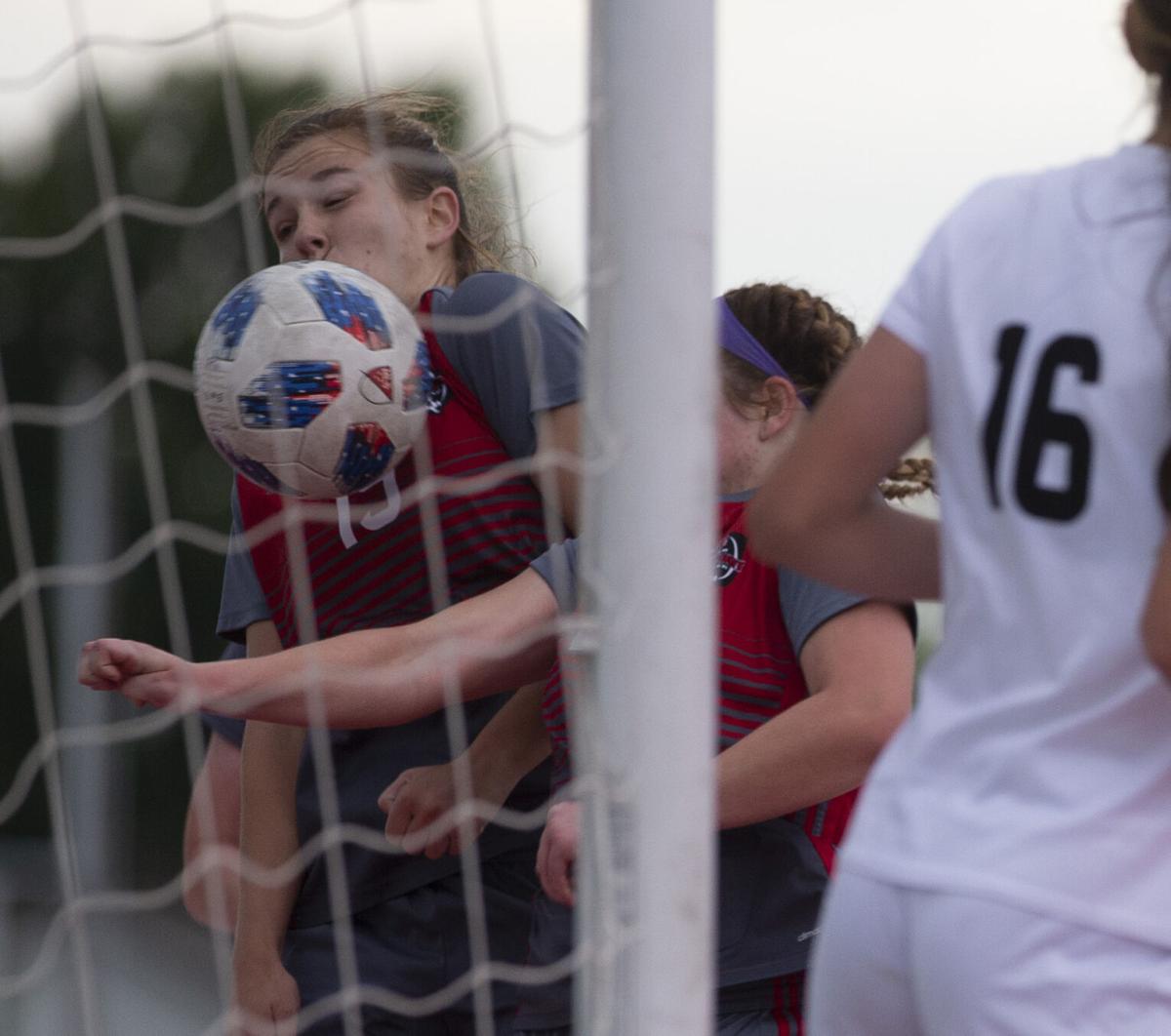 Fort Gibson’s Sydney Taylor heads a corner kick in for the Lady Tigers’ only goal against Woodward Tuesday evening to advance to the girls 4A state finals later this weekend. 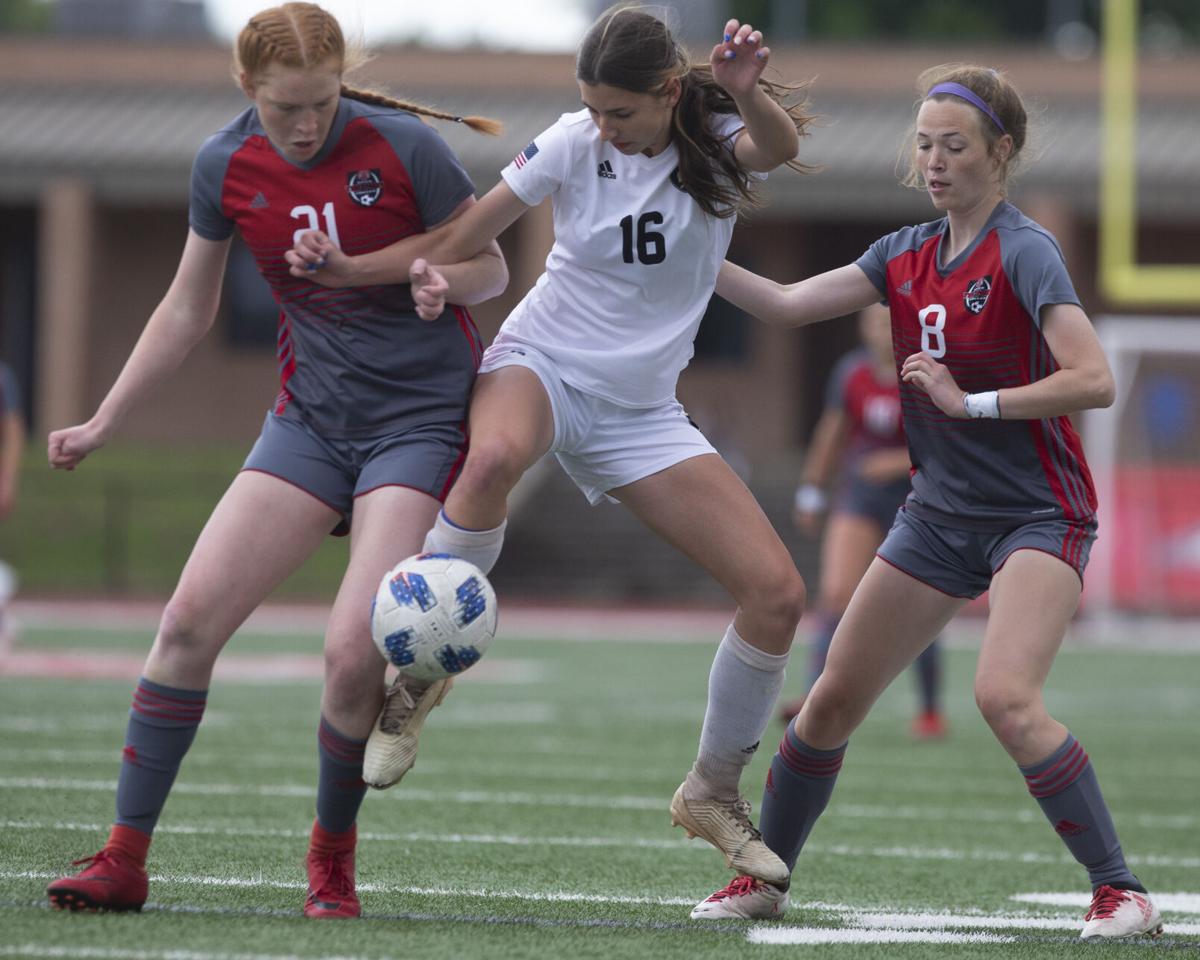 Fort Gibson’s Sydney Taylor heads a corner kick in for the Lady Tigers’ only goal against Woodward Tuesday evening to advance to the girls 4A state finals later this weekend.

The OSSAA announced Wednesday morning that the Class 4A championship game between Fort Gibson and Metro Christian will be played at noon Saturday at Rogers State University. The story has also been updated to reflect that.

FORT GIBSON — It’s on to state — and a chance for revenge for the Lady Tigers of Fort Gibson.

After controlling most of the game, the Lady Tigers scored off a corner kick with just over four minutes left in the game and the Fort Gibson defense recorded its 13th shutout of the season as they turned back the Lady Boomers of Woodward 1-0 in the Class 4A soccer semifinals at Leo Donahue Tiger Stadium Tuesday night.

Fort Gibson (14-3) will play in the state championship game for the first time since 2015, against Metro Christian, who defeated Clinton in the other semifinal. If playing in the championship wasn’t incentive enough, the Lady Tigers will also be trying to avenge their only district loss —  a 1-0 setback against the Lady Patriots three weeks ago.

“These girls and my coaching staff are special. We put in a lot of work and it’s great to see it paying off,” said Lady Tiger coach Billy Whitehead. “This game was a lot tougher than what we had expected and they gave us all we could handle.

“We had opportunities but didn’t cash in on them, which has been a bit of a problem during the season. But they stuck with it and never game up. Sometimes when the talent doesn’t get the job done, hustle and heart get you there and that’s what the girls showed tonight.”

Fort Gibson outshot Woodward 17-6 and had six corner kicks compared to none for the Boomers. Klaire Downey probably had the two best shots in the first half for Fort Gibson as she knocked one just outside the left post early in the game and then hit the cross bar with a rocket later in the half. The game was scoreless at the half and Whitehead said the team talked about some things to improve on in the second half.

“We talked about getting the ball off our feet quicker because they were pressing in the middle,” Whitehead said. “We needed to get the one-twos going and once we started doing that it gave our midfield some opportunities.”

Woodward (12-5) found themselves a little more in the second half and controlled the Lady Tigers better, limiting them to just six shots but were unable to mount much of an attack themselves. Finally, with 4:13 left in the game, Albany Adair put a corner kick on goal. The Boomer keeper had the ball for just a moment but lost control and Sydney Taylor found a way to get it into the net.

“We had so many corner kicks and when this one came up I just said this has got to be it. There’s only a few minutes left,” said Taylor.

Laughing, she added: “I’m pretty sure it just hit off my stomach but it went in and that’s what counts.”

One of the seniors that has put heart and soul into the program to reach this peak is Lauren Undaunted, who reacted as you might expect.

“Going to state means literally everything,” she said. “All the hard work every year, it’s so worth it. It’s nice it happened in my last year because this is the farthest this group as has ever gone and it’s just crazy and I’m full of emotion.”

The state final will be held at Rogers State University Saturday at noon.