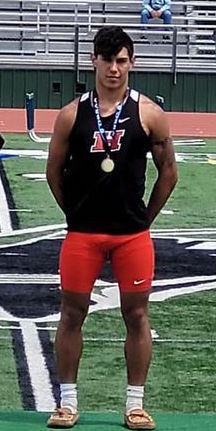 Hilldale's Dylan Walker won the 4A long jump at Catoosa on Saturday.

Oktaha's Bekah Bunch was the 2A champion in the discus Saturday. 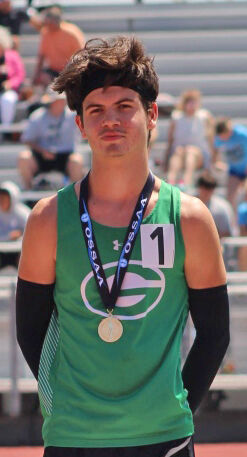 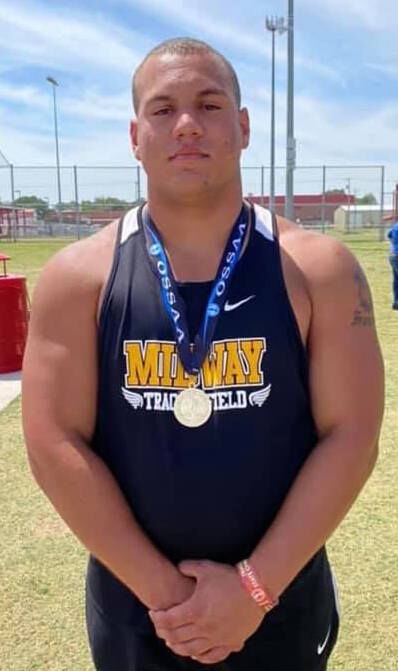 Midway's Leslie Howard won the Class A shot put with a throw of 48-10.

Hilldale's Dylan Walker won the 4A long jump at Catoosa on Saturday.

Oktaha's Bekah Bunch was the 2A champion in the discus Saturday.

Midway's Leslie Howard won the Class A shot put with a throw of 48-10.

Dylan Walker said he felt the jitters early on Saturday.

The Hilldale senior’s long jumps had been averaging 22 feet. He was in the 21-foot range in the early going of Saturday’s Class 4A track and field championships at Catoosa High School.

“Really it was jitters,” he said. “The past couple times here I haven’t done that well.”

It all changed when he reached the finals of the Class 4A track and field championships at Catoosa High School, and capped it with a personal best of 23 feet, 1 inch and a state championship he had been eyeballing since his disappointing ninth-place finish at state at this same spot in 2019.

There wasn’t a 2020 season due to the pandemic.

“When I got to the finals, I told myself I think I have this,” he said. “I’ve had this planned ever since conference that I wanted to get that 23-foot jump and I was confident I could do this here.”

Muldrow’s Trendon Collins was second with a 21-6. Wagoner’s Julian Smith, who was runner-up to Walker at regionals, was fourth at 21-3.

It was an exclamation point for a career that has spanned several sports. He had hopes of a college football offer as an All-Phoenix receiver with almost 800 yards this season as the Hornets barely lost a quarterfinal matchup against Cushing. Not the prototypical height for a receiver, those offers didn’t materialize.

“Not any good ones,” he said. “I’m still talking to my family about it but at this point,I don’t know if I’m going to play sports in college or not.”

If not, there’s not a better way to end it.

Oktaha’s Bekah Bunch not only was a multi-sport athlete, but a two-sport athlete in the same season, playing on the slowpitch team that missed a state berth by a game and at the outset of track season, was still in basketball.

It didn’t impact her in the Class 2A meet at Ardmore Saturday, winning the discus with a throw of 129-1.

“My coach told me before the meet I needed to throw 125 to win it, which I hadn’t done before,” said Bunch, a sophomore.

Her final throw bested runner-up Jade Byrd of Stratford, who scored a 127-9.

“If it ever conflicted, I know I have a better chance of going places for track than softball,” she said. “I threw when I could, usually three times a week and on Sunday I’d go see my throwing coach in Tulsa, and I’d throw at my house.

“Right  now I don’t want to give up softball or basketball. I like to play but I also like the part of being a team and making memories together.”

Unlike Walker, Gore junior Ty Bliss isn’t done, but he set himself up for a promising senior season by running the table in the 3,200 meters this season, winning the Class 2A championship at Ardmore in a time of 10 minutes, 11.11 seconds. He missed a sweep of the 1,600 when Samuel Fantoni of Regent Prep caught him in the final 50 meters in 4:42.11 to Bliss’ 4:43.58.

“It was so close, it could be a completely different outcome if we ran it again but he’ll be gone next year,” said Bliss. “He ran a good race.”

It is a bit of redemption for Bliss, who in the fall won a regional cross country championship and had the best time in the state going into the state meet, but a stress fracture cost him a chance at gold then.

He’ll have a chance to win all three next year as a senior and get a shot at the next level.

“I’ve had some coaches say they’d like to talk to me but nothing yet,” Bliss said.

It was the opposite kind of day for heavily favored Caden Goss of Fort Gibson.

“The foot wouldn’t allow it,” said Goss, who now looks ahead to a college career at Rogers State. “I’ll just take some time off to get healthy before I start summer training.”

Leslie Howard became Midway’s first-ever state champion in track with his win in the shot put (48-10). He edged Aden Kelley from Thomas Fay-Custer, whose 47-8 held up until Howard’s last throw.

“I couldn’t have got there without my team and coach,” Howard said.

Howard, who was a multi-time All-Phoenix defensive lineman in football, said he had to shake some early nerves after warm-ups were interrupted by a medal ceremony.

“Warming up I realized I wasn’t throwing as good as I was before they sat us back down, about 2-3 feet shorter than I was,” he said. “It seemed like the ceremony delayed us about 30 minutes.”

Back in 4A, Fort Gibson's Sydney Terry saw her run of wins in the 100 hurdles end, finishing third in 15.74. The spoiler at the top was Madi Surber of Tuttle, who established a new state record in 14.11