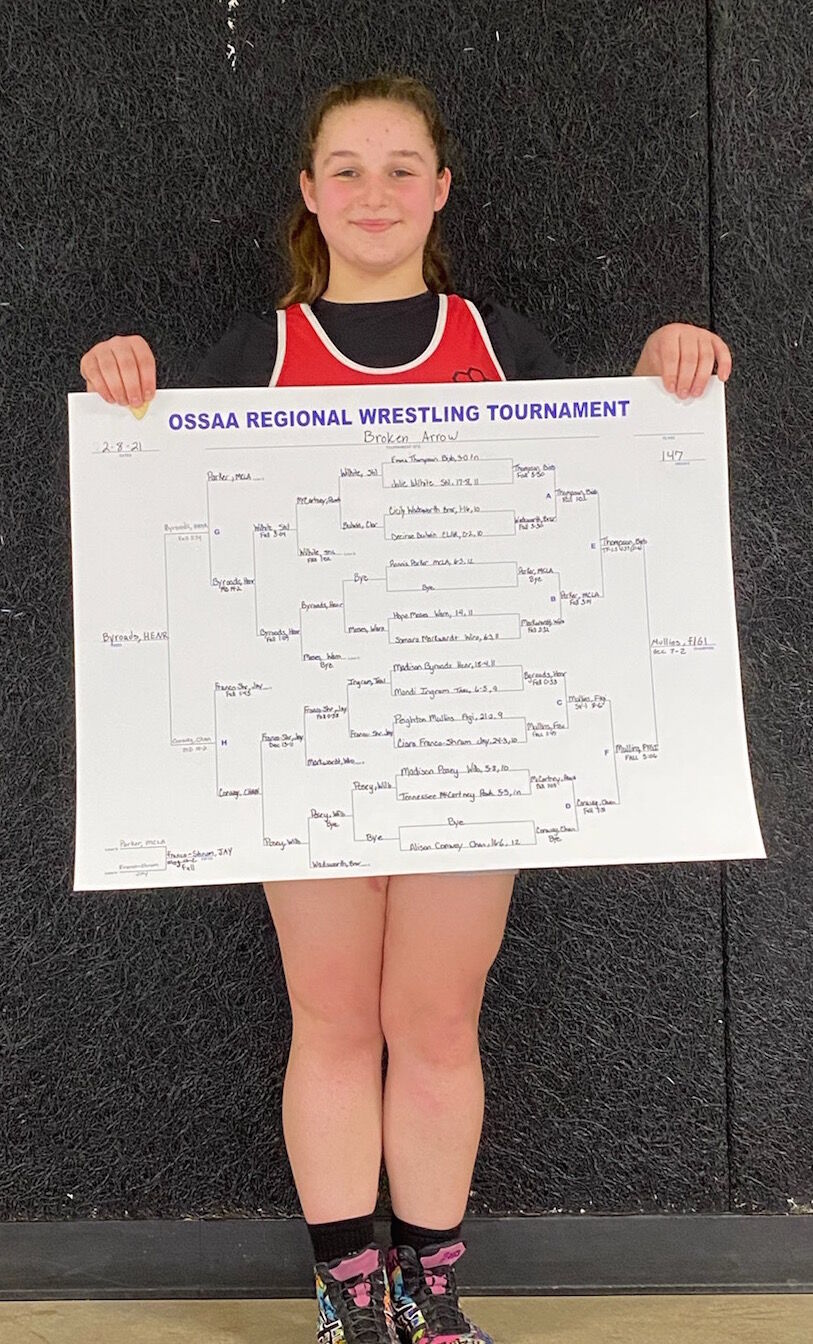 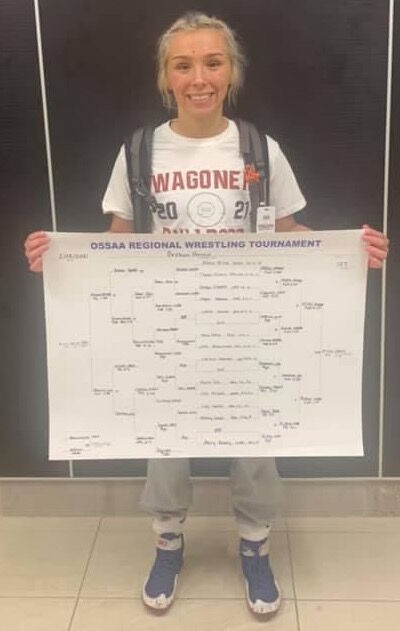 Wagoner's Lexi Miller, a senior, will go back to Oklahoma City to defend her state wrestling championship at 107 pounds.

Wagoner's Lexi Miller, a senior, will go back to Oklahoma City to defend her state wrestling championship at 107 pounds.

When Wagoner’s Lexi Miller looks back at her 2020 state championship wrestling match, she doesn’t like what comes to mind.

Even though she won in front of a sizable crowd at Jim Norick Arena on the state fairgrounds in Oklahoma City.

“I really didn’t wrestle my best match and that’s kind of crazy to say,” she said. “But there definitely were things I didn’t use, I didn’t take as many shots as I usually do.”

She said the setting got to her a little.

“A big arena and knowing like, oh my, this is the first-ever girls state tournament and a really big deal, so the emotion of it got to me,” she said.

So it won’t be anything new this time when the senior returns for another go at state in a couple weeks after winning a regional championship Monday at Broken Arrow. She’s one of two regional champions, the other being Fort Gibson freshman Peighton Mullins, in the first year of a sanctioned state tournament.

Last year’s was an open tournament at state alongside the sanctioned boys event, done as a test run for a sport that for years, has had girls competing alongside the boys all the way down into the youth levels.

Miller scored a major decision in the finals of last year’s inaugural event, 17-7 over Jordan Blair of Bethel at 107 pounds. At regionals earlier this week, she pinned four consecutive opponents, capped by one in 2 minutes, 40 seconds over Avery Richey of Vian, again at 107.

“It was a pretty tough tournament and it was nice to have some qualifier (events) before state,” Miller said.

It was just after state last year she had her eyes set on an overseas event in Estonia, which would have given her experience against some of the top international girls in the sport. But then the pandemic shut down travel and most events of that kind.

And other opportunities shut down as well.

“It was really tough not going to that, or for that matter others that got canceled, but in the end it helped me to take a step back and focus on training and not just having to prepare for tournaments every week,” Miller said.

And it appears she’s on a collision course with Blair, who blew through the bracket in the West  Regional, getting three pins, each taking under a minute.

“I haven’t wrestled her since state but we’ve wrestled before and I’ve always enjoyed going against her,” Miller said. “She’s a tough girl and it’s great to have that kind of match to look forward to end my senior year.”

Miller is looking at wrestling in college, where the sport is growing but still limited. Oklahoma City, Dixie State (Utah) and Grand View (Iowa) are her top choices so far.

“None of those have scholarships for wrestling but they’re private schools and there’s other options for getting aid,” Miller said. “I’m not rushing that process. I’m going to take my time with it.”

Meanwhile at Fort Gibson, Mullins has all the time in the world. This will be the first of a possible four state runs for the freshman after she ran the table against seeded competition Monday at 147 pounds, capping it with a 7-2 win on points against Bixby senior Emma Thompson.

“I told her going in, we’re going to win it, we’re not just going to place,” said Fort Gibson coach Sammy Johnson, who watched her come up as part of the youth wrestling program. “She’s been in some big matches now. We’ve wrestled girls 3-4 years older. In youth tournaments you’re going against your age or no more than a year’s difference.”

Mullins transferred from Keys to Fort Gibson this year but has competed in the FGHS youth program. Johnson said she’d wrestled up a weight at 155 in junior high competition and a lot of that beating boys. Her record, club and otherwise, is 22-2 now, but going into her four state matches, she didn’t have enough criteria wins against high school opponents to be seeded.

“So she beat a sixth seed from Jay, a girl from Henryetta that beat her at conference, a two-seed from Chandler who she pinned, and she’d never beaten the Bixby girl who was state champ from last year, but she had beaten her sister,” Johnson said. “So she went from not being seeded to taking out the 6,3, 2 and 1. I’d say that’s a pretty good showing of what she can do.”

Madison Byroads of Henryetta, the girl she lost to at the conference, fell in the rematch in overtime, 8-6. She rode that momentum to the win on points against a girl who, like Miller, won on the sport’s first-ever such stage in Oklahoma.

For Mullins, wrestling is her only sport. She first got interested when a PE coach at Keys invited her to a wrestling match.

She found her way in and against both boys and girls on the way up. While the girls sport is still growing, it isn’t as numerous as the boys division and sometimes in order to get matches, you have to cross over, which she has at times through junior high.

“I don’t really look at gender when I’m wrestling, I just go wrestle,” she said. “I feel like some look at me and think ‘that’s a girl, I can go beat her.’ One time I was about 9 and I pulled my headgear off and the boy I wrestled thought up to that time he was wrestling a girl.”

But that’s exactly what she’ll be doing Feb. 25 at the state fairgrounds, unless the schedule changes. Aiming at the first of potentially four titles.

“I think I can do it,” she said. “I’ve worked harder in practice than ever before and I’m going to continue to do that.”