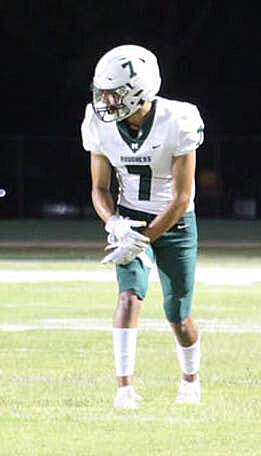 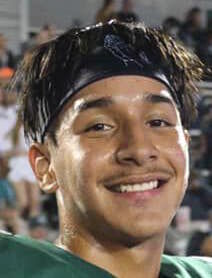 At 0-5, when the tendency among some is to quit due to lack of playing time or injuries that seem to hurt more than if you’re 5-0, he’s still there.

When his best friend on the team is no longer there due to injury, he’s still there.

When his best sport — and one most likely to help him through college — was wiped out last spring by COVID-19, and he sees the batting machines are closer to his last class of the day than Indian Bowl is, he’s still there.

For Muskogee head football coach Rafe Watkins, that’s one of the bright spots in an otherwise eroding 2020 season.

“He’s a warrior,” Watkins said. “He’s not the fastest, not the strongest, but his motor goes all the time and he refuses to quit.

“It’s what you look for in kids. I know everyone wants to be a starter and when things go bad it’s easy to quit but there’s going to be tough times in your life when things don’t go the way you want. The best lessons are going to be those like this where you learn to stick with something and fight through it, and he’s one of the seniors who are doing that.”

Not that it’s been easy.

Ty Williams, that friend who talked him into playing the sport in the first place, has only made it back from a hamstring issue for half a game, then went back on the shelf again, done for the season after committing as a safety to Oklahoma State.

Early on, the “fiery” nature of Zapata’s as Watkins describes as a plus came out the wrong way after a play in the second game this season at Bentonville. Zapata lined up wrong at a wideout spot and it led to an interception by his best friend’s replacement behind center, Walker Newton, in his first start.

The conversation between Zapata and offensive coordinator John Graham got heated.

“He’s a lot like me in that our emotions run high, and they were running high at that moment on both sides,” said Graham. “And after the moment, we talked about how maybe we both got too fired up. We understood where both were coming from, we’ve got mutual respect and it’s been great ever since.

“Sometimes it takes an event like that. I said what I did because I knew we could get a lot more out of him and I thin since then he’d say we’ve gotten that.”

“It was a heat of the moment thing and frustrating,” he said.

The outcome that night, 41-0, didn’t help. But since then, he’s been a help for his young quarterback.

“Antonio has helped him in his progression,” Graham said. “Newton knows Zapata is going to be there and if he gets it to him, he’s got a better chance.”

He set up a touchdown run by his quarterback with a 39-yard reception last week against Bartlesville.

Zapata is right there with Raheim Payne in receptions (12) and yards (225 to Payne’s 228) but with a team-high two touchdown receptions. It’s an offense that has had a sophomore replacing a Division I safety and four-year starter at quarterback, a running back duo that has either had to split time between offense or defense or had injury issues, and various other replacement parts from time to time — on both sides of the ball.

Zapata himself is a businessman. He has 20 or so lawns he takes care of in his own lawn service.

At some point, though, he wants to go into the construction business with the one uncle in Wichita, Kan. That’s why he wants a business degree and to become the first in his family with a college diploma.

Baseball might help him do that. He’s a solid centerfielder for a Roughers team that has improved under coach Johnny Hutchens. It’s also the sport he’s played the longest.

And it would have been so easy to go to the batting cages and get ready for a senior season after seeing his junior year zapped by the pandemic.

He won’t have anything to do with that. He’s needed at the moment, both as a receiver, a starter at safety with 26 tackles, and a leader for a young and raw team.

Up next is Thursday’s trip to Choctaw — a team that eliminated Muskogee 29-21 in the first round of the Class 6AII playoffs a year ago but was realigned into the eastern district of Division II.

The Yellowjackets (3-3, 2-1) were 1-2 in non-district tilts, all in Arkansas, losing to Springdale and Greenwood but beating Van Buren. In district, they edged Tulsa Washington 26-22 and Ponca City 20-14 but lost to Bixby last week, albeit in the closest challenge Bixby has had all season, 24-13.