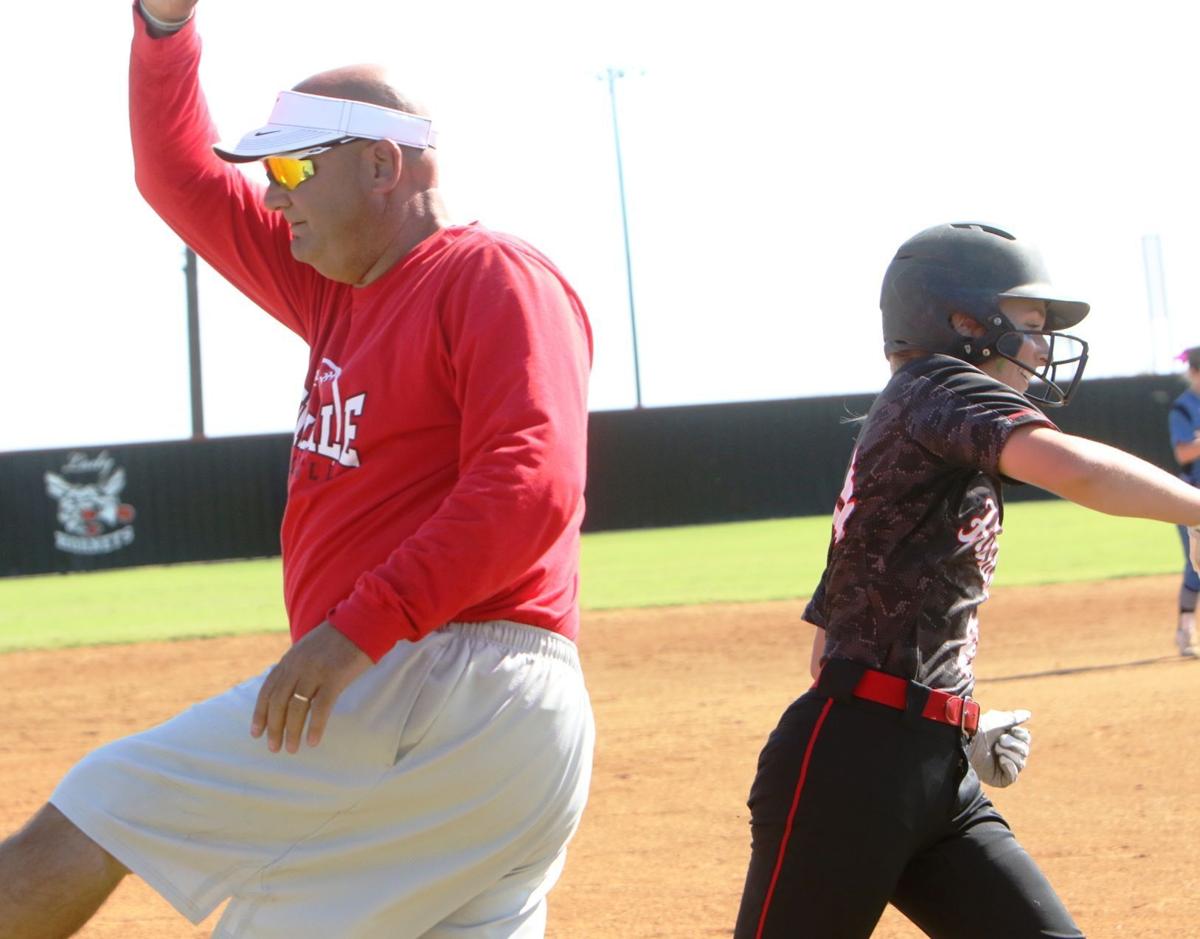 For Hilldale coach Darren Riddle, 2020 is the swan song for the part of his career that has seen him coach three daughters since 2008, including the last of the group, Drew, seen getting congratulations before scoring in her freshman season in 2017. 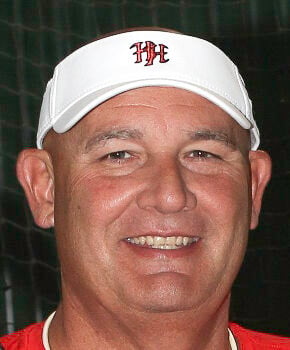 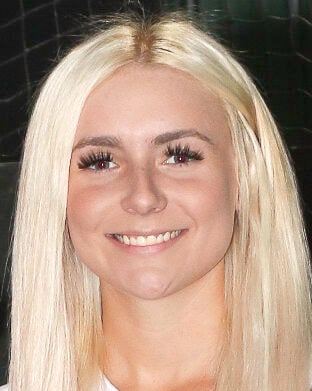 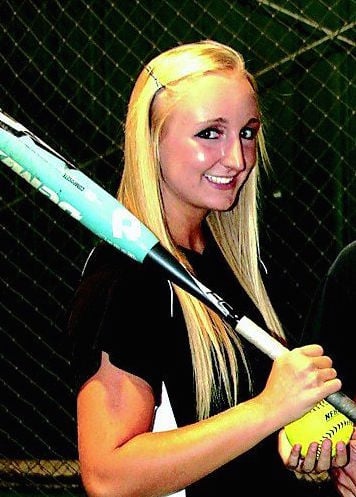 Danielle Riddlle-Easley, shown back in 2011 in an All-Phoenix photo shoot. 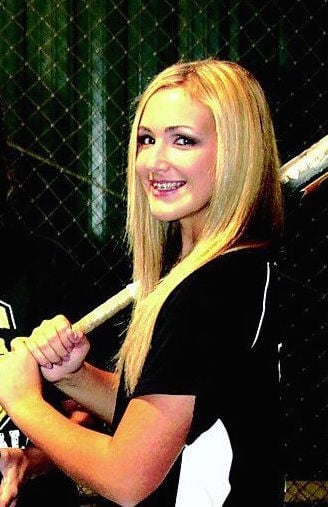 For Hilldale coach Darren Riddle, 2020 is the swan song for the part of his career that has seen him coach three daughters since 2008, including the last of the group, Drew, seen getting congratulations before scoring in her freshman season in 2017.

Danielle Riddlle-Easley, shown back in 2011 in an All-Phoenix photo shoot.

There will soon be a change of routine in the Riddle household.

No, it won’t actually end with the Class 4A fastpitch state tournament this week.

The third of Hilldale coach Darren Riddle’s daughters, Drew, will be the last to end her Hilldale career. But it’ll be a phase of closure for the two.

There’s one more summer of ball with the Tulsa Elite her dad now coaches.

After that, Drew will head to the University of Tulsa. Darren will look up and for the first time since 2008 — with a two-year break between middle and youngest sibling, it’ll be just the extended family of his next edition of Hilldale girls.

He thought about that last week, hours before Drew went through another phase, the last father-daughter game on the Hilldale diamond.

He paused, then borrowed from Crash Davis’ advice to Ebby Calvin LaLoosh in “Bull Durham.”

Little steps toward an eventual finality, where again, the door won’t close for months.

The thought of it all struck Drew.

At least, through the game.

A couple hours later, she finished a five-inning perfect game (15 batters faced, 15 retired) in the regional championship with a game-ending double. It was her third solo no-hitter and just a day removed from a combined no-hitter with Brooklyn Ellis throwing the final inning.

As Drew had with the other no-hitters, her response was nonchalant.

“Wasn’t paying attention,”  she said about the accomplishment. “All I was focused on was giving my all.”

It’s not a blowing-it-off remark.

Drew has ate, drank and slept softball, both directly and through her sisters.

“From the time she was 3 or 4, she’s always been hitting or throwing at the house and stuff,” Darren said. “One year my wife had her on a T-ball team with boys, a summer league team and then a team in the Elite organization she still plays with.

“She’d change uniforms in the car some days. There’s times she’d get hit in the face and she’d get bloodied up. The moment we’d kind of think we’re horrible parents, she’d be up and ready to go back and play. That’s her personality and mentality, and it’s always been that way with her.”

Maybe more than the others, having fed off their playing days as well.

Danielle, now Danielle Easley and a mother of a two-month old son, was first (2008-11) before going on to play at Arkansas and Oklahoma State. Destiny joined her at Hilldale for a year her senior season, then played through 2014 before heading to Southeastern Oklahoma.  Dad had two years where it was strictly about coaching them in summer ball.

Drew has played at Hilldale the past four seasons.

“All the time we’re together, it’s a lot about softball,” Darren said. “And it’s been that way for a while.”

No one really followed in mom’s shoes. Traci Riddle was a highly-regarded tennis standout, playing at Southeastern.

Personality-wise, Drew and Darren are very similar.  Just focusing on the words, the dry wit, the occasional deadpan remarks, you could attribute those elements to either.

Drew’s unique in that way.

Or, maybe the really unique one in the mix is Sister No. 1.

“I am definitely more of the quiet competitor out of the three of us, which I feel is more reflective of how my mom’s personality is and how she carried herself during her tennis career,” Danielle said. “Destiny and Drew are both more outspoken on and off the field, like my dad.”

There seems to be a distinction between how Darren related to all three.

“He has different ways of talking to me and my sisters and teammates,” Drew said. “Destiny and Danielle could take his heat better than I could sometimes. He knows how to talk to me to get me to play to the best of my ability.”

Darren thought about that.

“Thats’ where he likes to chew me out,” she said, grinning.

The other two were always pitchers. Drew played a time at third when the pitching staff was deep. At one point she even played catcher, a spot that impressed the TU coach so much that Darren said he told him she might become a backup catcher when not playing third base there.

Eventually, Drew would turn from fan to player on their level. Those BP practices with her sisters at some point turned into home run contests.

“Mom even got to come shag balls even though tennis was her sport,” said Destiny.

Through it all, they each had their share of honors. Danielle was All-Phoenix in 2011 after making the team each year at Hilldale.  Destiny was a two-time All-Phoenix selection (2013, 2014) and a four-time member, making it as Newcomer of the Year in Danielle’s senior year.

Was there a best of the three?

“I have to say it’s me,” she said. “I’m not being cocky, it’s me. They both may be better pitching, but overall, I can play any position, left side, right side.”

Darren seems to grimace in his reaction, then breaks into a grin and a slight chuckle before seizing the conversation.

“You’ll get a more elegant answer out of the sisters...,” he said.

“...And they’ll both say they were proud of their sister.”

He then offers an analysis.

“Drew got recruited early for a reason,” he said, recalling her commitment as a freshman. “The main reason was because she can swing it. It seems like the better pitch, the better swing, and you find that with kids who can compete. It may not be the position she wants to play, but as long as she can swing the bat, she’s fine with it.”

I think we would both say overall it’s Drew,” she said. “Danielle’s work ethic is unmatched. I was confident in the circle, but Drew is her own person. She is such a natural, raw talent that makes softball so fun to watch. The way she carries her self on the field exudes confidence in the player she is. She’s one of a kind.”

But there’s one thing Destiny has that neither of her sisters have — a state championship ring, won her junior season. She one-hit Bethel in a 7-0 win and was three outs from a seven-inning no-hitter. Danielle had one state tournament and reached the semifinal after beating No. 1 Catoosa in the first round. For Drew, it’s now four trips.

But only one has the jewelry.

“I’m jealous of that,” Drew said. “I want a ring too. And there would be no better way to go out than with one.”’

Darren, who won one as baseball coach as well as with Destiny, knows that’s not always in the cards. This will be the ninth consecutive season Hilldale has been at state.

“Winning in baseball is great, winning in softball was great, but you can’t go win it every year,” he said. “Even the year we won, we weren’t the top seed.”

If he doesn’t win this one, the next one will be his alone.

He’ll have no one to talk about it with on the way home.

At USA Hall of Fame Complex