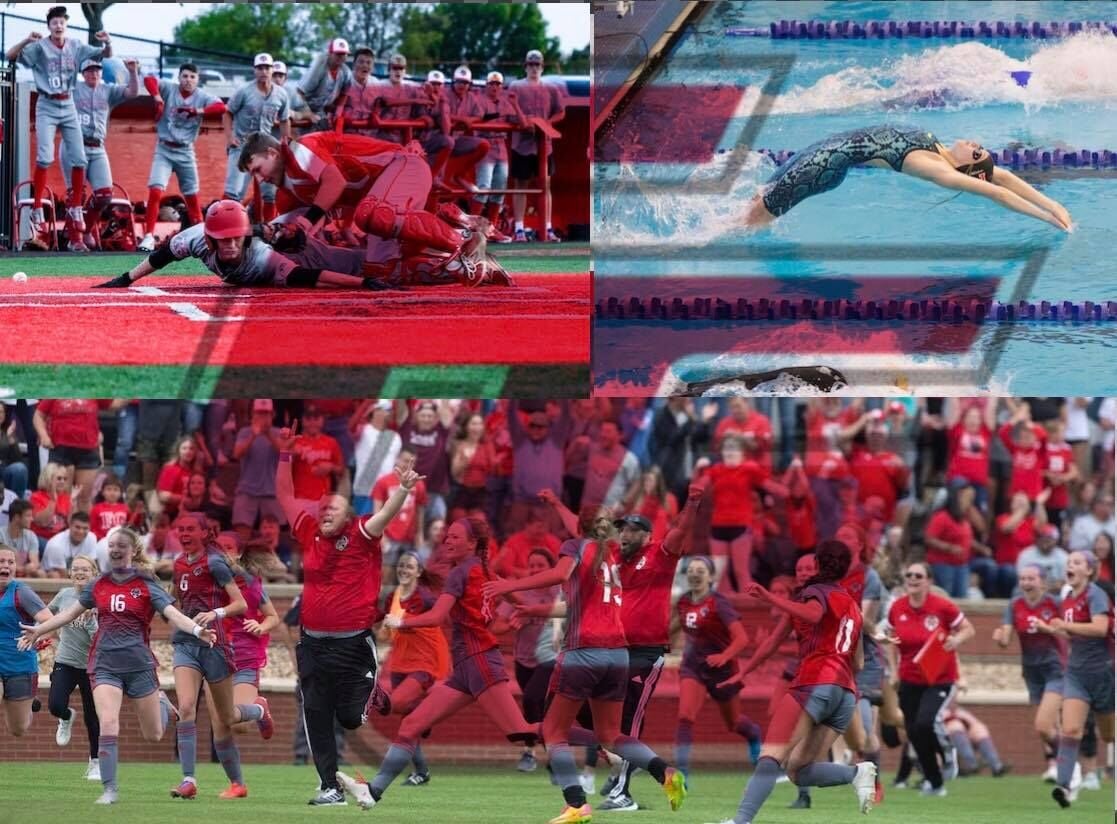 Baseball, swimming and girls soccer were among the reasons why Fort Gibson scored a School of the Year crown in 2020-21

Baseball, swimming and girls soccer were among the reasons why Fort Gibson scored a School of the Year crown in 2020-21

But for the first time since 2018, Fort Gibson is back on top as the Phoenix’s School of the Year.

The Tigers edged Wagoner — which had both the Male and Female Athlete of the Years in Braden Drake and Lexi Miller —  for the top spot, with Hilldale third. Sequoyah, which dethroned Fort Gibson in 2019 and also won an abbreviated sports year in 2019-20, withdrew from athletics this term due to COVID-19 concerns.

But the Tigers in 2020-21 were  remarkable enough, even minus one of the three schools to win the honor in the history of the award.

School of the Year is determined by a points system which awards teams for being in the top 16 in any sport team wise. Five points goes to a state champion, four to a runner-up, three to a semifinalist, two to a quarterfinalist and one for finishing among the top 16.

A bonus point is given in football for making the playoffs as one of the traditional top four teams out of a district. No adjustment was made for what the OSSAA did this fall in allowing all teams to advance to the postseason due to COVID issues.

Also, any school with a state champion individually or in an event within a sport got a half-point per title.

Fort Gibson finished with 32 points. Wagoner had 27, followed by Hilldale with 20, Oktaha 10 and Eufaula 8.

It’s the ninth time for Fort Gibson to win since the grading was put into place in 2003.

“To us it’s a tremendous honor,” said Fort Gibson athletic director Chuck London. “It starts with Mr. (Scott) Farmer (superintendent), Mr. (Ben) Pemberton (principal) and our board who support athletics tremendously, and our coaches understand that. Coaches have to coach, players have to play and I think we have a tremendous group of kids with great character who are very coachable. Just really proud of them.”

Fort Gibson had a state championship in girls soccer, its first, along with a girls basketball runner-up and four top four finishes — in boys and girls swimming, baseball and boys soccer.

“Our girls soccer through the years has been competitive and we’ve knocked on the doors a few times,” London said. “They had tremendous expectations this year on the field but also off the field. They really came together as a team.”

Coach Billy Whitehead’s squad also came together in the classroom. They along with the slowpitch team were academic state champions.

The combined top four finishes for boys and girls swimming was the best output in several years, all under first-year coach and former Lady Tiger state champion Leslie White.

“We had the changeover with coach White and our numbers with the boys, we didn’t have a ton of numbers but they competed well. The girls, there were some expectations there this year and they followed through,” London said. “I think Leslie got the most out of those kids.”

While Fort Gibson has the only swimming teams in the area — Muskogee has individuals as did Checotah but no full teams — that is not necessarily a built-in advantage even though the six points earned their separated them from the field. Fort Gibson doesn’t compete in volleyball nor boys or girls tennis. Wagoner competes in those.

Meanwhile, only a pandemic stoppage has kept London’s girls basketball team out of the state tournament. It had to be canceled to put an asterisk on what is now 17 consecutive state trips, including the runner-up finish to Tuttle this year. Along the way, they knocked off top-seeded Classen SAS. London’s team started the year with one returning starter and another questionable with a torn ACL.

“From the level we started at to the level we finished at was as big a gap there as I’ve seen at Fort Gibson since I’ve started coaching here,” London said. “To go the road we did, the number of ranked teams we had to play and defeat, I would put that up against any team in any class, including knocking off a team some thought might be the best team in any classification.  As time goes on you appreciate more what we accomplished.”

Another team making big strides was baseball, which was a controversial changed call on a force play at the plate from going against Heritage Hall in the Class 4A finals.

“The best news is no senior had to end their career on such a sour note,” London said. “There are no guarantees going forward and we all know that as coaches, but it’s good every kid on that team has another chance, and baseball’s been coming for a few years now. (Gary) Edwards has done a good job bringing that along.”

Wagoner had its fifth state championship in football, a top four finish in girls wrestling in the first year for sanctioned team and individual competition in that sport. Also, Miller and Kaden Charboneau were state champions in wrestling. Wagoner had its best season ever in girls golf with a regional and conference championship and the Bulldogs, though sixth this year, were closer than the 107-shot deficit trailing Hilldale as runner-up a year ago.

And Hilldale, despite heavy graduation losses, repeated as state champions in girls golf.  A semifinal finish in boys soccer matched Fort Gibson there, with both teams falling a game short of meeting each other in the title game. And, the Hornets had a long jump champion in Dylan Walker.

Fort Gibson is in a good spot to repeat in 2021-22. Baseball returns everyone. Boys basketball, down somewhat the past couple years, is in a position to make a run. Wrestling is awash in returning talent and the girls champion is a freshman. Also Layne Ailshie, runner-up in golf, has the state champion out of the way thanks to graduation.

Other factors which will impact competition is Sequoyah’s return and whether athletes who transferred to other schools will be allowed to return.  Also, there’s the open enrollment bill signed by Gov. Kevin Stitt.

On open enrollment impacting transfers, London said the impact is too hard to predict at this point.

“We all have our thoughts on what impact it will have, but I think it will take some time to see how it does,” he said. “Open enrollment isn’t the same as athletic eligibility and how the OSSAA handles the changes will be interesting to see. I’m sure they’ll have  to adjust some things, but I’m not sure if automatic eligibility will be part of it.”

Oktaha and Eufaula rounded out the top five. See the attached scoring for details.