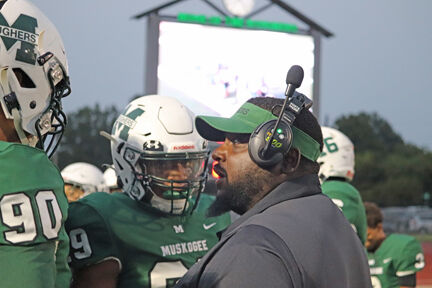 Anthony McNac  instructs Muskogee players on the sideline last season. McNac is starting his 19th season as an assistant. 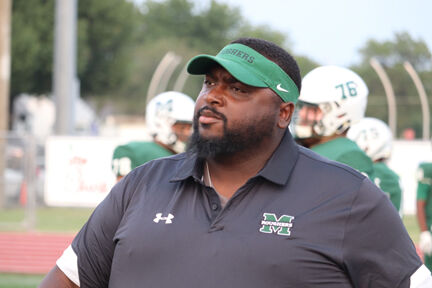 Anthony McNac  instructs Muskogee players on the sideline last season. McNac is starting his 19th season as an assistant.

You could say Anthony McNac is the “senior statesman” around Muskogee football.

He laughed at the suggestion this week.

But on longevity, he’s exactly that, entering his 19th season — and sixth head coach’s program.

His roots here run deeper than his job tenure.

Born and raised in Muskogee, he was a standout as a All-Phoenix defensive lineman, graduating in 1999. He graduated from Northeastern State but didn’t play ball there. He was a coach in the Paul Young Football League that introduced him to the game as a youth, as head coach of the sixth-grade Saints team, when the path to where he is opened.

“One day we got to practice early and the eighth-grade team was on the turf and Jack Schultz, the head coach and my running back coach in high school under Ron Freeman, came up and started talking about what I was doing and he told me he needed an assistant,” McNac said.

He coached for Schoats two seasons in a voluntary capacity, When Ron Lancaster took over the high school program from Monroe, he hired McNac as a junior high coach. He stayed there through Lancaster and Matt Hennesy’s tenure, then was elevated to the high school as a ninth grade coach and then tight ends coach under Josh Blankenship.

Rafe Watkins arrived. McNac continued to coach tight ends and then switched to defensive line, and that’s where he is in Travis Hill’s first season, also serving these days as a teacher’s assistant.

Clearly, having a pulse on the community has been an advantage to staying through six tenures.

“With Lancaster it’s not like I was taking him around to people, but people who wanted to talk to him might come to me to go about approaching him,” McNac said. “With Watkins it was like he’d ask me about certain kids and parents and what I knew about them.

“Being from here, born and raised here and going through the program I know a lot of people and a lot about the community, and these kids in here now, a lot of them I went to school with their parents.”

McNac has an appreciation for his time spent at the middle-school level.

“My first year I had guys like Rell Lewis, Carlos Smith, the next year Stacy McGee, Jameel Owens,  and then Archie Bradley and Jake Roach, all kids who had some success in sports beyond high school,” he said.

Those were among a group that in high school had three straight semifinal trips. There’s some differences, he said, between then and now.

“Some of those kids were generational-type players, but they were also a group that molded together well,” he said. “When Lancaster got here we wound up at one point having to play in two conferences, Frontier Valley and Metro Lakes, because we couldn’t get out of the latter.

“We split the group into two teams playing two games a week, one in both leagues. They’d either play on one or the other but we kept them together, we suited all of them up and took all of them to both games just to be able to supervise everyone.”

He said he thinks that helped mesh two into one.

“If they weren’t playing in a game, they’d be cheering the ones on who were,” he said. “They’d pick up on things watching each other, to where if you called a blitz, they’d be telling each other what it means and correct each other when they didn’t do things the right way. They’d take it better sometimes from a player than a coach.”

While the numbers were better than today, McNac said that isn’t an excuse for now. He scoffs at the thought among some people who tell him Muskogee would be better off dropping to Class 5A, which they stand a little over 100 away from the attendance line now.

“We still have the same type of players overall,” he said. “I never lost to Owasso, was 2-2 against Union, 2-2 against Broken Arrow and 4-0 against Tahlequah. Some of those schools were two- or three-deep in depth and we didn’t have those numbers. In 6AII, other teams have the same thing.

“People look back on those years and think if we’d been been 6AII then we’d won championships. But I say back then even though we were in with the bigger 6A teams we were still contending for championships.”

He said it’s all about establishing the kind of mentality that those teams had, and not just within the locker room.

“We need the community and the kids on the same page,” he said. “I think that’s the biggest difference between now and  then. Everyone now wants their kid to be the superstar and if they’re not, they talk bad about the coach. When Rafe went to the semifinals everyone was behind us, when we lost in the semifinals to Lawton people got negative.

“Bad bounces can happen. Things happen in life. Don’t bring the negative. Let them know you’re there for them.”