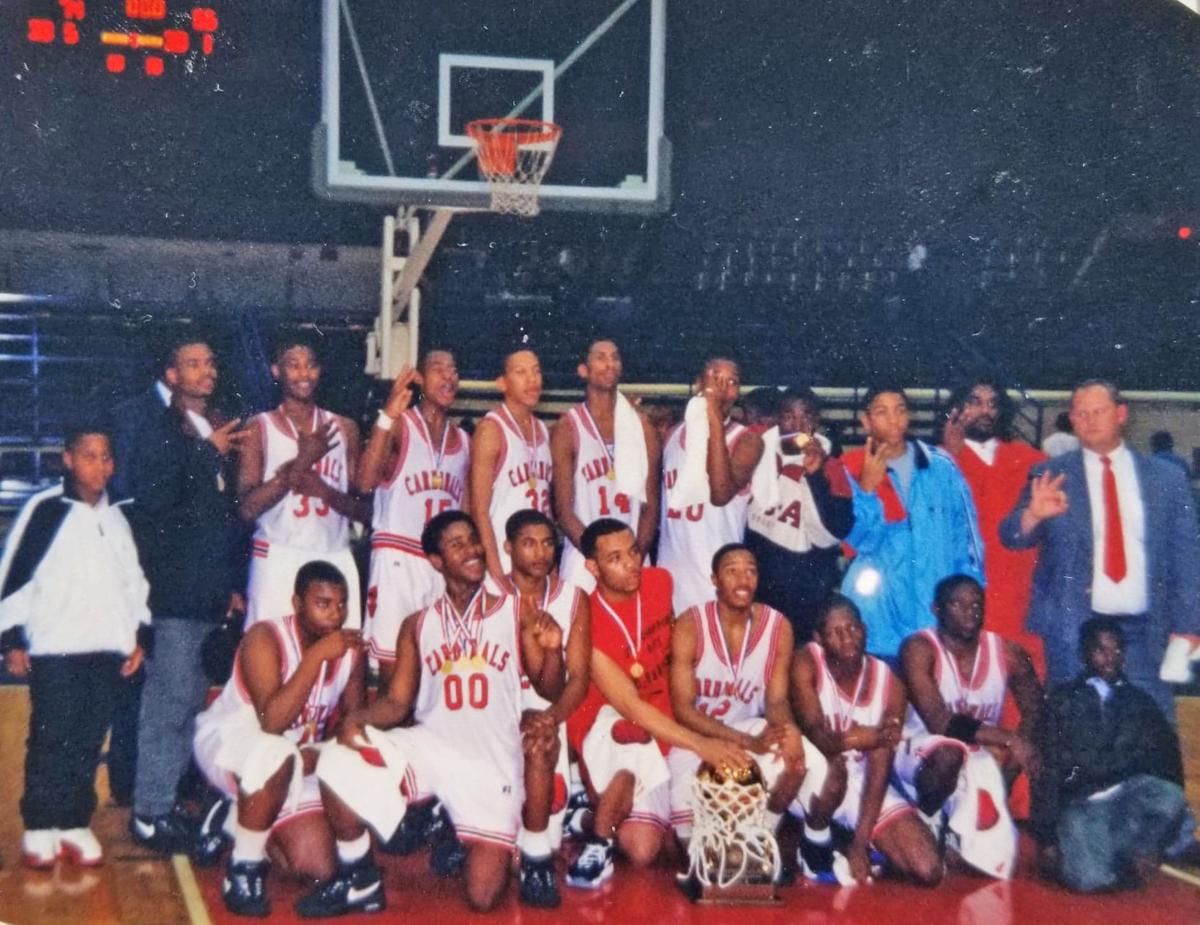 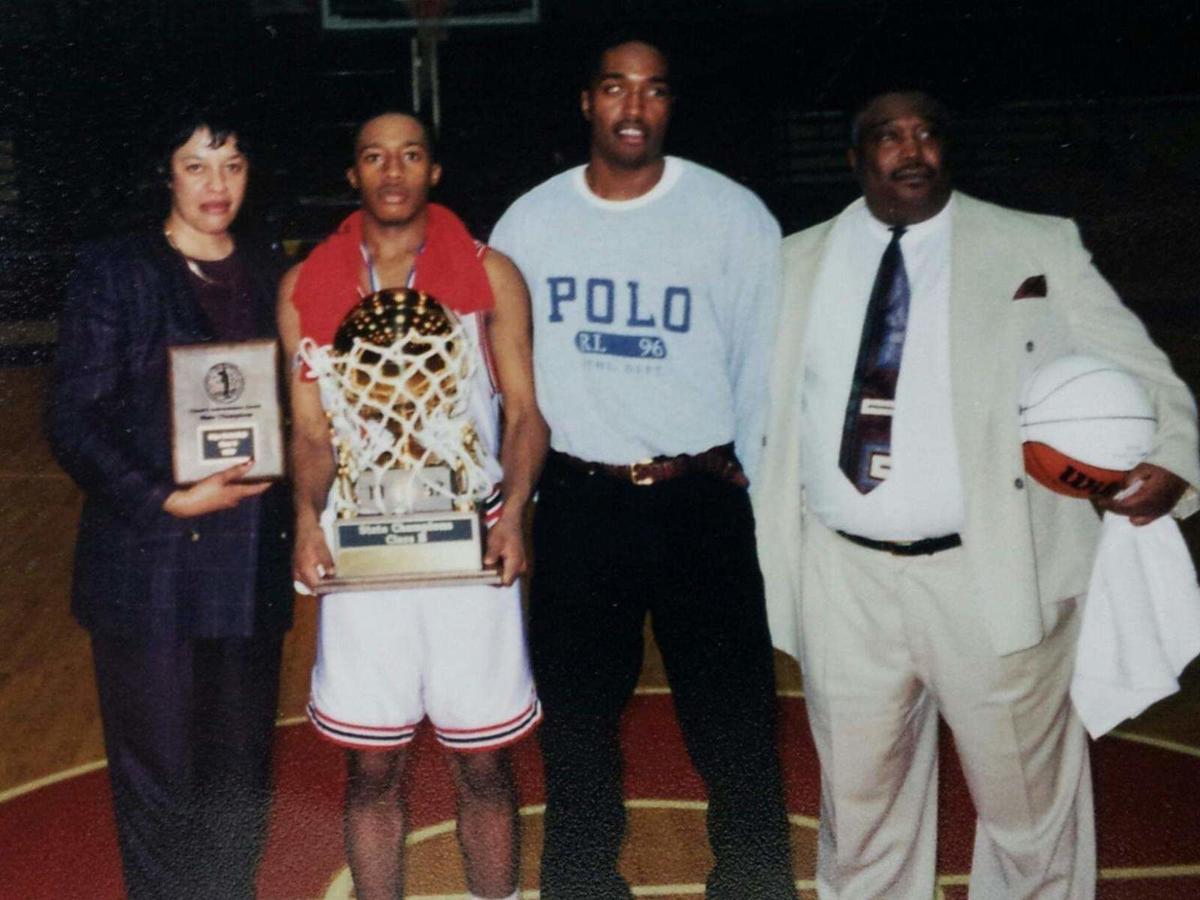 Both Jerry Belton and the Cardinals went out the way they had planned Saturday at State Fair Arena.

Boynton recorded its third straight blowout on its way to a third straight Class B state title with a 74-56 pounding of Hammon in Belton’s last name as coach of the small-school powerhouse.

All throughout the playoff Boynton never celebrated. The Cardinals were on as senior James Harrison put it, a “business trip.”

And all the hard work paid off for the Cardinals, who won their sixth title overall.

Boynton took care of business early against Hammon, a contrast from the last two games, when the Cardinals exploded in the second half to post easy wins.

Boynton scored 22 points in the first quarter and never looked back, taking a 37-25 lead into halftime.

“I told the kids before the game, we can’t let a team like Hammon get you down,” Belton said. “Because it’s hard to recover.”

And leading the way early was Belton’s son, Jermaine.

Jermaine Belton was on fire out of the game, scoring 14 points in the first quarter and all but one of the Cardinals’ points in the second. He finished with 28 first-half points.

“I didn’t want to start out slow,” Jermaine Belton said. “I started taking it to the hole and hope my jumper would fall right off the bat. I love the Big House (the nickname for the State Fair Arena).”

Bolton finished with 44 points for the second straight game, missing the state tournament record of 48 points.

And he likes would have had it, if he didn’t get into foul trouble in the third quarter. Jermaine Belton picked up his fourth foul just 2:37 into the second half. He sat out the last 4:49 of the third quarter.

“If he doesn’t get in foul trouble, he breaks it,” Jerry Belton said.

“Said Jermaine: “I didn’t want to come out.”

Boynton led by 14 (43-29) when Jermaine Belton came out of the game. But seniors Jason Harrison and James Smith picked up the slack.

“We knew we had to take over when Belton was on the bench,” Smith said. “Somebody else had to step up. I love it. I’m energized.”

Harrison finished with 12 points, all in the second half, including eight in the critical stretch.

“He’s been having good games all week,” Jermaine Belton said. “If I’m not on or when I’m not in there, we go to Jason. He’s a senior who’s been there for four years and he knows how to play in the state tournament.”

The Warriors were able to cut the Boynton lead to 59-48 with 3:40 left in the game, but couldn’t get any closer.

“I thought it would be a little tougher,” Boynton senior Michael Barnes said. “Coach told us to go out there and leave it all on the floor because it’s our last game, and we did. It feels good to win three in a row.”

“Right now, it feels like another win,” Harrison said. “But in 15 years, I know it’ll mean something.”

Boynton was making its 24th overall trip to state and Saturday was the Cardinals’ 12th time in the finals. All six gold balls came under Jerry Belton’s tenure, which started in 1979.

“What else can I say,” Jerry Belton said. “If you go out, you want to be on top. I’m satisfied, no question.”

I had got to the point that no matter how many wins or championships we won, when you create a monster, everyone wants to think about what you’re going to do the next year. If we’d go 33-1, lose your last game,  and people at home would ask Jerry what happened. I got pretty good but could never let them stay on me pretty long. I knew  we’d create a monster and it was kind of tough.

The success all runs together. The good thing about the three-peat, I knew since it was going to be my final season I wanted to go out a winner. Everyone told me we should have won four in a row and probably the reason we didn’t is I wouldn’t let (Jermaine) start as a freshman.  Of all the players I ever had, he might have not been as gifted as some I had but none had the heart of this fella. He had the heart to win and the leader in him, and that made him special. If I got on him everyone else would get in line.

(On picking up my fourth foul) my teammates and fellow seniors Jason Harrison, James, Smith and Michael Barnes said, “Don’t worry, we got this.” (we were a team and no one person is bigger than the team) They held that lead the whole third quarter until I came back in the fourth quarter.

I think about those years playing for Boynton and it was all about tradition. You had the master motivator,  Hall of Fame coach Jerry Belton (nicknamed The Professor by family and friends). We were chasing not only history, but bragging rights to lay claim to who was the best and only champions could be in that debate.

The true testament of a team is to win through all adversity with no excuses. We ate together, we prayed together, we played together. We practiced harder than everybody else. so to us,  the games were easy in comparison.

Now with US Postal Service, lives in Edmond

It was a heck of a run, now that I look back I enjoy it. I’m raising two step kids who play (one, Mekeion Payne is on Muskogee’s varsity roster, the youngest in middle school), and I brag about what we done, what we used to do. It’s bragging rights.

Jerry had a unique way of coaching but he knew how to maximize the potential of every one of his guys. He was a genius in that. Those were wonderful days of not having to worry about being grown, just being kids and enjoying every second of it.  And there were a lot of firsts for that group. We were the first ones of all those teams to win the Cascia Hall tournament and we were the first to three-peat. Kids these days I don’t think have the dedication we had. We ate, drank, slept basketball. We were in the gym every day. We didn’t have the distractions of the video games and cell phones that kids have today.

• Boynton was 27-1 that year, losing only to Sequoyah despite 61 points from Belton.

• Jermaine Belton wound up at Langston.  Harrison went to Connors State and then to Langston.