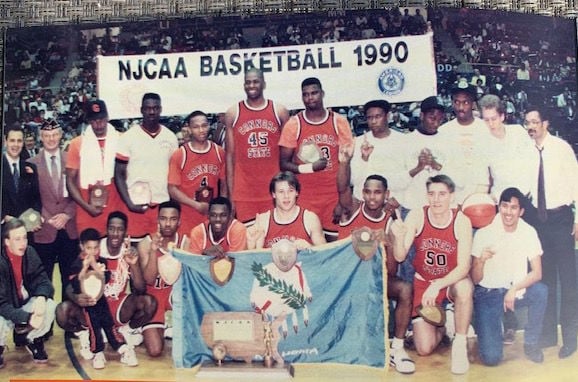 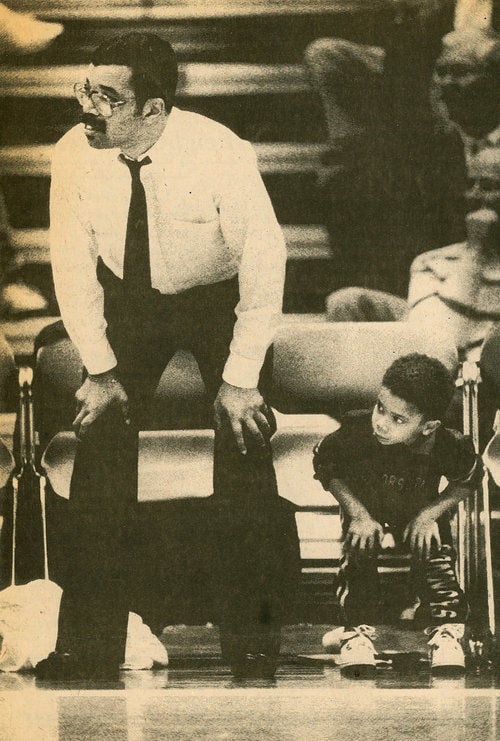 Ed Stepp, left, and son Grant, on a Connors bench.

Ed Stepp, left, and son Grant, on a Connors bench.

The Oddsbusters, alias the Cowboys, gunned down another foe in typical fashion, blasting the College of Southern Idaho, 103-87, to claim CSC’s first NJCAA Tournament championship.

“I said it at the beginning of the year, and I’ve kept on saying it all year,” said Stepp, who was named coach of the tournament. “We played well when we had to and we had to overcome a lot of adversity. We had several injuries during the season, but we overcame them all. We’re the Oddsbusters.”

Their closest game in postseason play was a 93-92 victory over Butler, Kan. Every other game was won by nine points or more.

“I think this, truthfully, was easier than everybody said it would be,” CSC guard Aaron Sunderland said of the tournament. “We played tougher competition in our conference.”

“We’ve been busting odds all year long,” said 7-foot-1 center Elmore Spencer. “We had a lot of adversity, a lot of doubters.”

The Cowboys had few worries Saturday night. Sebastian Neal, who had a game high 32 points, scored the first four points and Angelo Hamilton swished a three-pointer for a 7-0 lead.

Spencer, the tournament’s MVP, had five first-half assists, four of which turned into points for Neal, another member of the all-tournament team.

Neal’s 32 points followed a sub-par game against Champlain in the semifinals.

The Cowboys’ lead grew to as many as 18 points in the first half, before Sean Colter sank a three-pointer to spurt out to a 66-47 lead with 15:25 left.

The championship was decided.

“We were beaten by an excellent ball club,” said Golden Eagle coach Fred Treacle. “i’m proud of my kids, they played hard.”

Southern Idaho never gave up, but couldn’t make a dent in the deficit before Stepp pulled his starters at the 1:29 mark. CSC was up 103-75.

The only stain on the championship was an injury to Reggie Tinch with 3:43 left. Tinch twisted his ankle trying to block a shot and was carried off the court by Spencer to the delight of the standing room only crowd at the Sports Arena.

That was quickly followed by an Mike Allen steal that led to a 360-degree slam dunk by Hamilton. Allen was named the tournament’s best small player.

“We wanted it tonight,” Tinch said. “We just decided to play together and give it 100 percent — no more, no less.”

Eight players from that team went on to further their college careers including Reggie Tinch, who signed with Georgia, Sebastian Neal, with Oral Roberts, Elmore Spencer to UNLV, Mike Allen to Southwest Louisiana, Aaron Sunderland to Long Beach State Eddie Shepard to Georgia Southern. Tinch is the only one at this point from this squad in the Connors Athletic Hall of Fame.

We had a hard time getting out of Tulsa. The girls qualified for nationals at the same time and transportation was a problem. We flipped a coin and the girls got to take the bus and our guys had an airport van. So my guys being 7 foot, 6-8, had a hard time fitting in there.

Our budget wasn’t real good at the start of the year and the uniforms we had were too small, so I had one set to fit and wore them 38 games. When we got to Hutchinson, if you were in the bottom bracket you had to wear white. We didn’t have white. I told them, which was a hoax, that someone stole our uniforms. We got through that battle and then we had to play the third, second and first seed teams to win it.

Honestly it was a great experience. The first year we went 23-2 or 22-3 and when we had an opportunity to back the next year and have an almost flawless season, it was rewarding. We built a brotherhood and with Ed Stepp and the rest of the coaching staff, we built a family and learned to play with each other.

AT&T, founder of Dream Sports of America.  Also an ordained minister and is currently leading Champion for Christ Ministries in Riverdale, Ga.