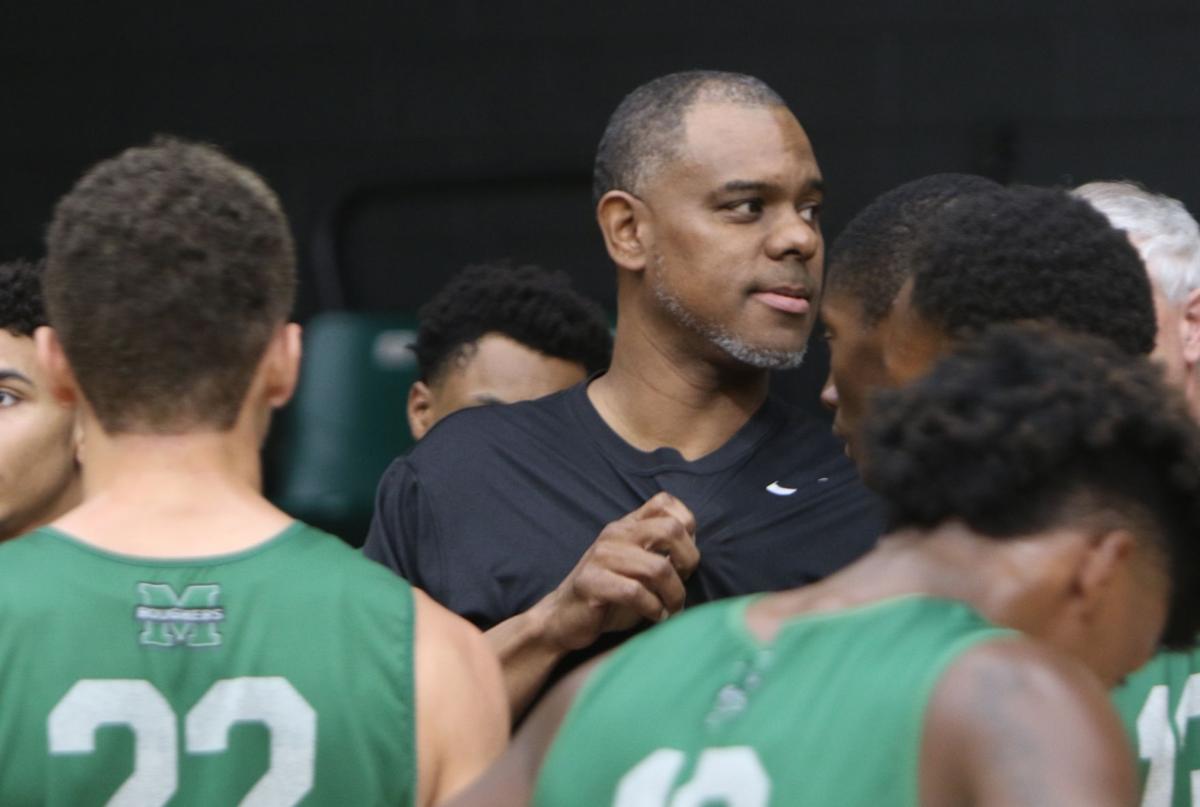 New Muskogee High boys coach Lynwood Wade huddles with his players during a scrimmage on Monday. 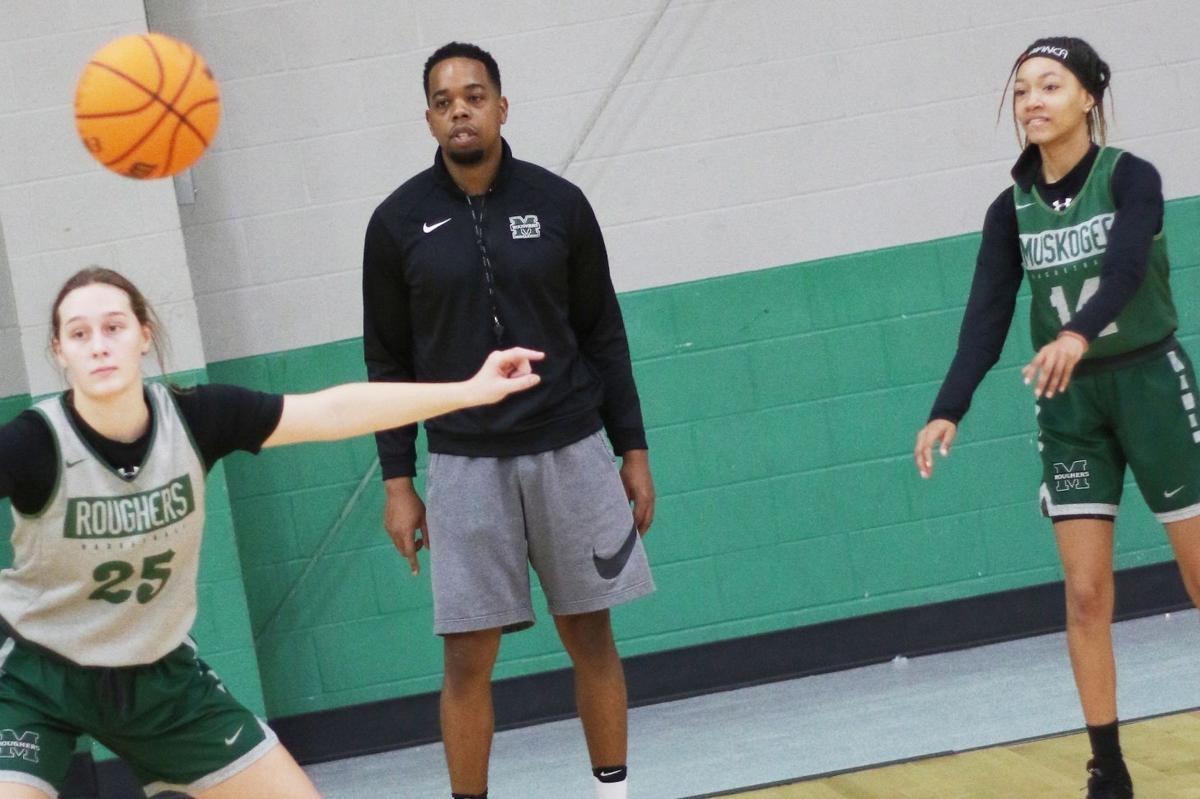 New Muskogee High boys coach Lynwood Wade huddles with his players during a scrimmage on Monday.

For both Lynwood Wade and Jeremy Ford, the good thing is they have each other to talk to about it.

Both were hired in the summer to take over the Muskogee boys and girls programs. Both programs are coming off 2-22 records in 2018-19.

The two coaches have known each other for years. Wade was a little ahead of Ford, graduating from Muskogee in 1990. Ford graduated from Wagoner in 2004.

“Anywhere we could get in a gym — YMCA, the Armory, rec center — there he was and there I was, bouncing the ball, always competing,” said Ford.

Wade remembers those days — days in which the member of the Muskogee Athletics Hall of Fame would return from the states from having played in multiple spots overseas. Now, it’s coaching in adjacent gyms until the season comes together in December.

“He was a young guy in those days,” Wade said.

“He’s methodical in what he does,” Wade said. “He puts the work in.”

They’ll both need to to turn around some hopes here. While the boys have had better records than 2-22, they haven’t won a first-round playoff game since 2013-14. The girls have had consecutive two-win seasons.

Both know it’s a process.

With Wade, the emphasis is on accountability.

“Practices are player-driven. They come over, read the schedule, jump into the drills and there’s a lot of holding each other accountable,” he said. “That’s my main focus. Inside policing, inside the drills. Not being timid about speaking up about ‘why are you letting him do that when you know it’s wrong.’

“I’m sitting here and watching, and now I’ve got these guys saying, ‘hey, you need to be on the help side, or you need to do this,’” Wade said. “That builds a team.

“Some coaches get intertwined to where. …I mean, I can’t play for them. They have to play for themselves. I’ll put new stuff in, but they’ve got to collectively buy in. It’s their program. I’m here to get you where you need to be, but it’s your ship.”

Speaking of ships, Wade has had his own series of journeys.

After graduation from Muskogee, Wade played at Texas State where he was later named to the Southland Conference’s All-Decade team. From there he embarked on a tour of international basketball with stints in Holland, New Zealand, Canada, Mexico, Dominican Republic, Venezuela and Malaysia.

“Basketball is universal, it’s not a language that has to be spoken to be understood, but it does boil down to a strategy and how you want to teach it,” he said.

A former Wagoner Bulldog, Ford was an All-Phoenix selection as a senior in 2004. He played the next two seasons at Seminole State, reaching the NJCAA national tourney his freshman year, before going on to finish his college playing days at Midwestern State. His coaching career started as an assistant at Tulsa Edison. He switched to the college side, coaching at Seminole and then Division II Arkansas-Monticello.

Ford has seen from a distance the powerhouse program of the early 10s that produced three state tournament appearances in four seasons. His younger sister, Jada Ford, was part of that run and is now in her senior season at Arkansas State.

His work with her brought him out of the college ranks and eventually, back here after a stint coaching at Cascia Hall to be closer to family and to help her.

He’s fully aware this isn’t Jada’s group. There isn’t one Division I recruit present, let alone the three she was a part of, including Texas A&M’s Aaliyah Wilson and North Texas’ Trena Mims.

“I think we have the tools to be successful. But we’ve got to take the small steps every day and get better day by day,” he said.

“Our motto is to win every day, whether competing on the court or the classroom. The girls have been doing that so far. We’ve been pretty successful in our scrimmages. Things are coming together, but it will be a daily grind.”

Guard D’Asia Brown is the returning leading scorer. Two senior forwards in  Lonnesha Hill and Shamaira Virgil will also have leading roles, Virgil in leadership and energy, Hill in athleticism and defending multiple positions. Keep an eye on an emerging offensive threat in 5-10 sophomore guard Akira Eubanks, an attacking guard  with good outside shooting ability.

Meanwhile, Wade has a goal of ending the playoff win drought. How?

As for Wade, he calls this a journey.

“It’s going to be tough. That’s why I stress to the girls, battles aren’t won overnight,” he said. “Competing is every day.  It’s going to be chip, chip away, but in the end I want to impart some wisdom with this game to help them to be better versions of themselves.”

Basketball season begins in earnest next Tuesday at most posts. Muskogee doesn’t begin until Tuesday, Dec. 10 against Bartlesville at home.