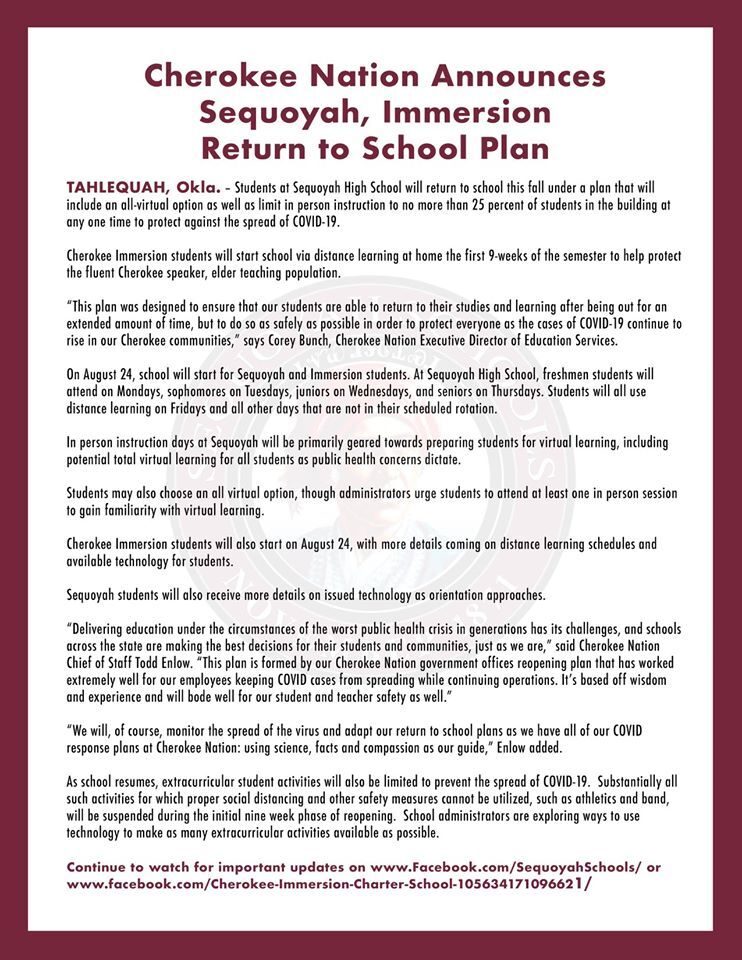 The Cherokee Nation in response to COVID-19 has withdrawn Sequoyah High School and underclasses from fall sports athletic competition for the first nine weeks of the school year.

"Anything constituting a mass gathering in light of our high COVID numbers of positive tests is being limited, athletics being part of that," said Julie Hubbard, Cherokee Nation communications director.

This would include football, volleyball, fastpitch softball and cross country.

School begins there Aug. 24. The nine-week period would end Oct. 26. Volleyball and fastpitch softball seasons would in effect be canceled according to those dates. Only two football games fall outside that time frame, Oct. 30 against Checotah and Nov. 6 versus Seminole. Other district games which will not be played are against Lincoln Christian, Westville, Locust Grove, Stigler and Tulsa Webster. Keys is also a non-district opponent now without a game.

Sequoyah is the first known area school system  to take such an action. The Oklahoma Secondary School Activities Association is still planning for a regular fall sports schedule for member schools.

“We may be the first school to cancel athletic activities the first nine weeks, but we do think other schools will also consider it and make tough decisions, and we hope they make decisions based on safety and the good of everyone,” Cherokee Nation Chief of Staff Todd Enlow said.

“We know that some students will be disappointed, but we hope they will understand we have to think about our parents, our coaching staff and entire community.”

Enlow added the decision is in line with the state's recommendation, nothing the state's Board of Education in its recent guidelines to schools recommend that buildings and campuses not be used for extracurricular activities.

Those guidelines, however, were not mandates.

None of the Sequoyah athletic personnel were available for comment. Athletic director Marcus Crittenden and Chad Hendricks, who left Checotah this spring to become Sequoyah's head football coach, referred all interview requests to Cherokee Nation administration.

Cherokee County is gaining 30 new cases per day based on every 1,000 people, Hubbard noted.

David Jackson, executive director of the OSSAA, said the move wasn't surprising and that a few other schools had made similar moves. He wasn't sure how many.

"We're working to gather more information from the schools to get a sense on how many (more) may decide to postpone," he said.

"A larger (number) deciding to do so could impact our plans."

None of the Sequoyah athletic personnel were made available for comment. Athletic director Marcus Crittenden and Chad Hendricks, who left Checotah this spring to become Sequoyah’s head football coach, referred all requests to Cherokee Nation administration.